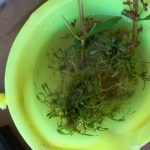 Ammannia coccina in background found in same place
… you have Glossostigma cleistanthum
This a new Zealand species Is it even found in India?

A German Aquatic botanist is saying this is Glossostigma diandrum which is the only Glossostigma species found in India.

A feedback from …:
Glossostigma Elatinoides. I recognise it because I grow it. Diandrum has narrower leaves at the top. The top is like the midsection. Here the top of the leaf is larger than the midsection.

I may be wrong (I am not a professional), it’s possible that the Indian variety is not the same as in Australia or the emersed leaf is different to the submersed? It looks a lot like elatinoides to me though which would mean that it is an introduced non-native sample?
Below is a youtube link to what looks to me like Diandrum from India. Diandrum in Australia has an elongated leaf, not fat at the end. But looking at this video again it does somewhat resemble the photo here so I am not sure now.
https://www.youtube.com/watch?v=i11vp7l06Y4

It is not possible to be an introduced species, as area was a drained seasonal marsh quite far from any human being, plus I have seen similar species in other locations in Shayadri hills.
Believe me, there are plenty of mysterious species out there on these low hills of Pune.
Mysterious Cryptocoryne, Rotula aquatica, Rotala serphylliphyla and Bulbophyllum keiki, Nechamandra alternifolia, aquatic Crinum, Potamegeton so on
And everything is quietly going extinct due to pollution of rivers and rapid urbanization.
I will get you more clear shots next rains after July month if u needed for confirmation.
its very interesting. I believe you have an undocumented species of glossostigma in India – not diandrum or cleistanthum, possibly not elatinoides either, though I believe it is elatinoides. A better photo of the runners between the leaf pairs would help identify. Elatinoides is thick and green, diandrum is delicate and white.
Correction- Diandrum does have green runners, they are just more fine and delicate (easy to break off) and can have a white appearance when viewed from above. The leaves are also smaller in size than elatinoides. Hope this helps…
No problem …

The principal distinguishing feature between elatinoides and diandrum is the size of the leaf and spacing on the runner (sorry I can’t provide the scale – the elatinoide tank is only a bit larger than the diandrum one).

Elatinoides are larger leaves and separated further apart (with thicker and more green runners between leaf pairs). That is the reason I believe your sample is juvenile elatinoides. From my experience both species grow well submersed in temperatures from 4 – 30+ degrees C.
. 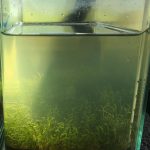