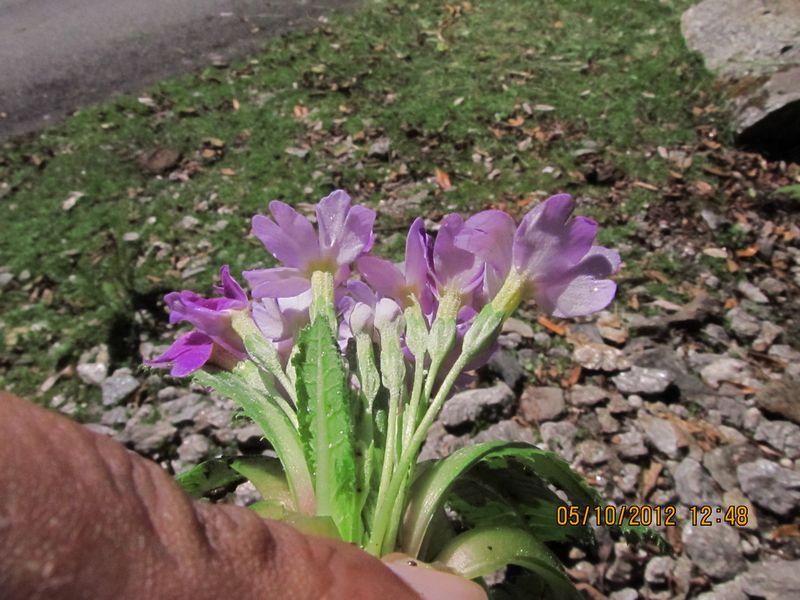 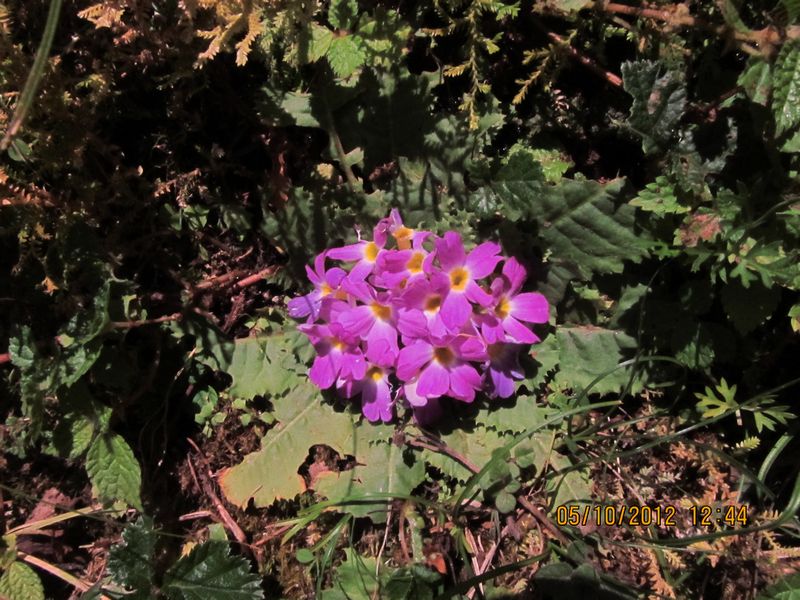 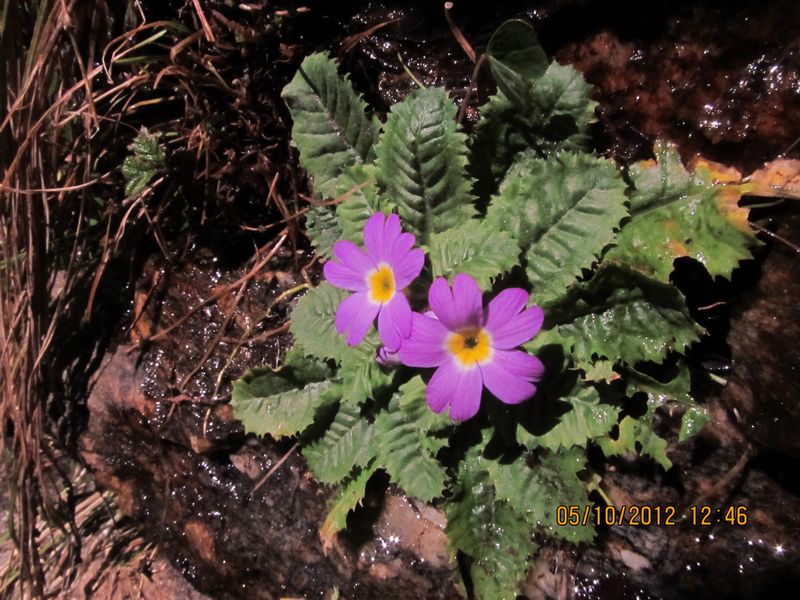 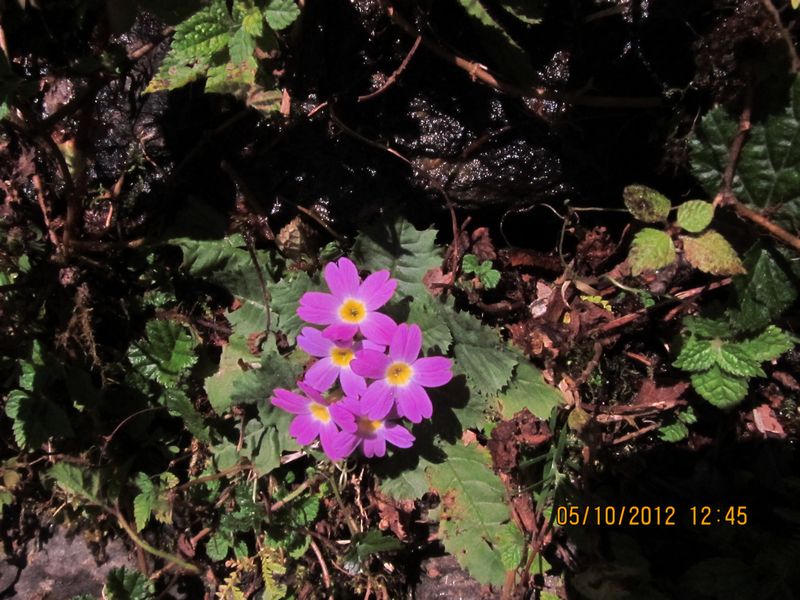 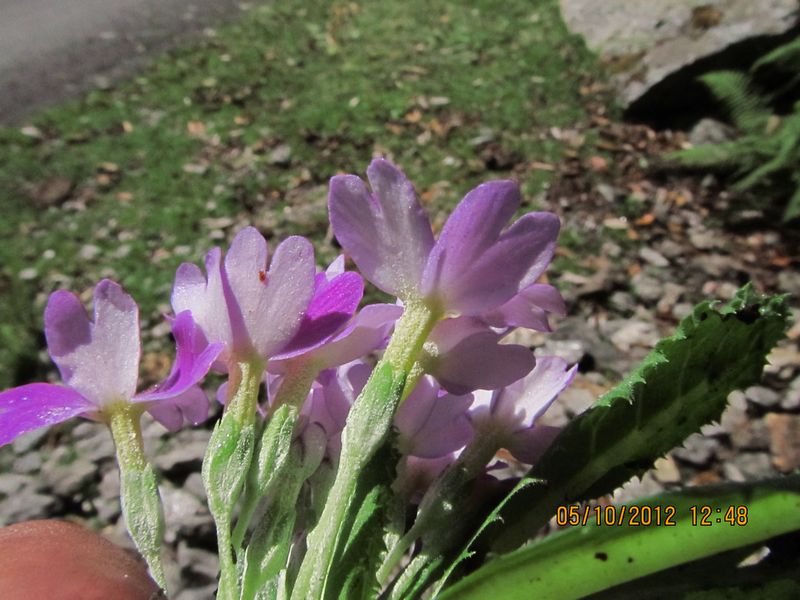 This very beautiful herb was shot from near a water source… a Primula species… shows similarity with P. vulgaris… wanted to know exact identification… you will notice the pictures without date have bluish tinge.. which was not natural.. only due to camera settings.. actual colour is bright pink… hope to get id…

It may be Prumula sessilis.

This is very strange… it cant be Primula sessilis as in sessilis petals will have pointed tips but here they are blunt two lobes. It looks like deformed form of Primula denticulata but thats a wild guess. I might be missing something….

Would you be kind enough to tell me the altitudes of the TWO different species you have posted images of?  The FIRST (7 images) which you say was near a water source is clearly different fro  the SECOND (the final two images); do you possibly have any additional images of the latter.
Neither are close to Primula denticulata nor Primula vulgaris – which is not a native of the Himalaya.
Knowing the different altitudes (the habitats are clearly very different) will help my efforts to identify them.   Would you also supply approximate dates of flowering?

I agree with your direction on this. The pedicels are too long for P. denticulata or P. erosa (thus your suggestion of deformed). The whole plant looks like it could belong in the Petiolares Section, but that doesn’t fit with the last two detailed images showing farinose pedicels and emarginate corolla lobe shape.
I will have to think more on this, but I would welcome more suggestions.

My request for altitudes where the two sets of photos were taken has not been answered.
Am I correct that the last two images are not from the same plant?
I am willing to take a further look but need some input from you to help narrow down the options nor waste time – that would not be fair on me.

I noticed, the time on the photographs are matching for all pics, but just incase the individuals are different.

OK but what is the approximate altitude and what do you mean by a water source?
Can you describe the habitat please?

I am sorry to delay the matter, I have two submissions:

1. The altitude of the place was around 1500-1800 m, and the pics do all belong to one taxon only (may be more than one individuals). The differences are due to two different cameras. The place, locality and time is same.
2. The habitat was a small seasonal stream, on exposed slope. The water just enough to keep a few meters wet and dripping.
I will be happy to know your valued opinions, thanks for all your efforts.

Thanks. This information is a BIG help. I shall things further.

This really is proving to be a mystery! Not that many Primulas are known from Uttarakhand and none seem to fit the plant you have photographed.  Mind you, I cannot think what it is. Perhaps someone can forward the images to Professor Richards for his thoughts?  Could it be something special?  Late flowering, low-elevation, seemingly contradictory characteristics…..

I agree with the thoughts of Pam Eveleigh. The foliage and habit of the first images suggest must be a Petiolarid yet the last two images contradict this.  You have assured me the last two images are from the same population – though I can be forgiven for thinking they might have been from a different species as the pedicels are much longer and the leaf shape different (much narrower).  Pity you did not photograph both upper and lower surfaces of same flowers and foliage.
The use of different cameras and exposure issues complicate matters further.
Are there any Petiolares section Primula with such pronounced emarginate petals?  The first images are superficially similar to what I understand is  Primula boothii susbp. autumnalis (have just posted images of this taken by my eldest son in Nepal) which as the name suggests flowers late in the year and is found at modest elevations, especially near a ‘water source’ (though most Himalayan Primulas “like their feet wet”, yet the ends of the petals in that are nothing like your plant.
Most peculiar and defeating me, for the present.

Thanks for investing much of your time …, what I can do additionally at this point of time is that I can request … also who was with me and he also did take the pics.. hope some different and better views are available with him. This may take little time to execute..

Such images and information would be useful to have – and perhaps help confirm possibility novelty for Uttarakhand.

Thank you for these images. I am not sure where they were taken or at what time of year. At present I am assuming that they are taken in spring. This is a farinose plant (at least those taken from the side) with small erect sepals which can only be P. gracilipes a common and widespread spring flowering forest species in Nepal. With this farina the only other possibility is P. irregularis which has bigger, stiffer, spreading sepals with teeth.

Thanks a lot, … These were clicked in Gori Valley, Uttarakhand, India (possibly in 1st week of Oct. 2012).

It is so helpful to receive input from those with the maximum knowledge/familiarity with a genus, especially for examples we have been uncertain about.
Important though, that Professor Richards is made aware of the location, altitude and month of flowering – just in case they impact upon his opinion. Perhaps an autumn-flowering variant?

He has, as indicated in his e-mail about the Primula photographed at Munsyari, which he considers is P.boothii, recognised an autumn-flowering variant of that species, as subspecies autumnalis.
Naturally, it is of special interest to members of this group, when a species, subspecies or variety has their range extended into Indian territory or recognised only in Indian territory.
As far as I know, Richards ‘determination’ (not sure if he would count it as such) for this plant from Gori Valley means this represents the first record of Primula gracilipes in Uttarakhand, as is the case for Primula boothii at Munsyari.

Thanks a lot, … It is all because you requested that we take his opinion in this matter.

Thank you. It is unusual to find P. gracilipes flowering in the autumn. If the whole population is flowering freely then, may be this is a new autumn-flowering form of P. gracilipes, as is found in P. boothii. Probably it deserves a new name at lower rank.

Though I have not seen the account of Indian Primulas by Basak et al. (too costly for me to afford it personally!) but the checklist of flowering plants of Uttarakhand by Uniyal et al (2007) have no mention of this species (P. gracilipes) which indicates that it is also a new record to flora of Uttarakhand. I hope …, who found and photographed it, will be able to relocate it for collecting specimens and fresh sets of photographs.
This is in reference to your inquiry in a separate thread on a Primula uploaded by me and identified as P. boothii by Prof. Richards.
I also suspect these two species are widespread in Uttarakhand and probably misidentified earlier.

Most of the high altitude Primula are early bloomers. But this…flowering in October, almost at the end of season, must be interesting. Bifid petals rule out P.petiolaris, P.sessilis.

it may be Primula hirsuta because of bifid petal

This is a remarkable plant due to the bifid petals. It would be interesting to know if the flower colour, bright pink, is true. It has some resemblance to P. drummondiana, also winter-flowering, but that species has lilac flowers. There is a very little known plant P. cunninghamii which might answer this description, but the type material is very poor. It is presently treated as a synonym of P. drummondiana. We need to know the form of the fruit capsule as well. At present, this has the possibility of being a new taxon.

… has confirmed that the date of the image was in October and the location was near Munsiyari. This favors Primula drummondiana which was collected in October in full flower. The type specimens were collected from a pass above Namik, about 12kms to the west of Munsyari. Characters which are diagnostic are the Fall flowering, emarginate corolla lobes, flower tube 2-3 times the length of the calyx, efarinose leaves with a repand-denticulate margin, which we can see from the images. Apparently this species has multicellular glandular hairs on the upper leaf surface, which are impossible to see in the images. The seed capsule of this species is unknown and that has lead to some speculation as to its relationship with other Primula species. You can see a type material online at http://specimens.kew.org/herbarium/K000750236

Thanks … Yes the date and location do suggest P. drummondiana. We have to overcome the apparent flower colour of bright pink. We used to grow P. drummondiana and are very familiar with it. The flowers were always lilac to blue. Maybe the flower colour here is an artefact of the camera?

On digging further, I think this is the same plant as discussed in the post at Gori Valley Tour: Primula for identification.. (Pl. click this link to see the details).
At that time, you have tentatively written as
“It is unusual to find P. gracilipes flowering in the autumn. If the whole population is flowering freely then, maybe this is a new autumn-flowering form of P. gracilipes, as is found in P. boothii. Probably it deserves a new name at lower rank.”

Yes, you are right, it is the same plant with the same bilobed petals. It is not P. drummondiana and I believe it to be a new autumn-flowering taxon.