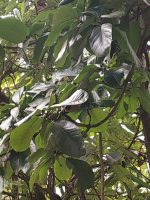 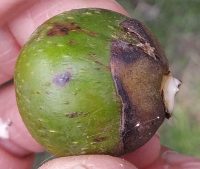 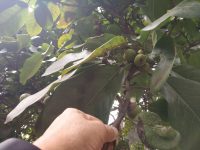 Ficus tree from Chongey, East Sikkim : id needed pl: 5 high resolution images.
I need help with identification of this rather large (c. 20m tall) Ficus sp. tree in our compound at Chongey, East Sikkim. It was planted around 30-40 years ago from saplings distributed by Forest Department then. I have no further information as the person who planted it is no more. It suffered regular lopping till about 6-7 years ago and some still due to the building constructed few years ago.
It is coming into fruit now and visited by the neighbourhood Palm Civet, fruit bats and many birds in season. No aerial roots. Local literature says there are around 30 Ficus species in Sikkim.
The fruits on this one are seen only on the tips of the thin branch tips which bear leaves, and none at all on the trunk or thicker branches; like in F. altissima, in the leaf axils. The fruits also do not change colour, remaining green, not seeming to ripen. I feel perhaps its specific pollinator wasps are missing. Any help with id is greatly appreciated. Pictures attached.

The Ficus tree, like the Banyan, locals call this too as ‘Bar’.
The green fruits drop and rot. The tree too sheds a lot of leaves every season, becoming quite bare (my leaf litter stash really piles up) , then the new flush greens it up again. I thought Ficus were evergreen.

This should be Ficus hookeriana Corner.
Similar to F. benghalensis but without aerial roots and fig with cup shaped connate basal bracts enclosing lower third of fig, in Nepali its called as Nebharo.

Thanks for the id suggested Ficus hookeriana Corner.  I checked https://indiabiodiversity.org/biodiv/img//Ficus%20hookeriana/F._hookeriana_1.jpg where the image shows the specimen from RBGE collected from Sikkim, but I could not view all the details.  It seems to match my tree. So thanks again.
But I am still not sure why the fruits do not seem to ripen and change colour.  Will try and keep a watch for pollinator wasps if any.
In Sikkim Ficus roxburghii is called Nebaro.  It has large rounded leaves and is extensively used by local people not only for fodder but also to pack butter, cottage cheese, fermented soybean, etc. and also stitched into leaf plates, cups during religious ceremonies in Nepali communities.
My Ficus hookeriana Corner used to be lopped for only fodder, and the Nepali community here calls it ‘Bar / Bur’ (as in ‘Bar-Pipal’ where both these are usually planted near each other).  People plant Ficus roxburghii near their cowsheds and edges of fields and they call this ‘Nebaro’.  Due to extensive lopping for fodder, one can never know the natural height these Nebaro could grow if allowed.  They are also very common, unlike my Ficus.