Stems very slender, crowded from the root, a span long and under ; branches divaricating, pale, rather leafy, often with a few scattered hairs towards the tips. Leaves coriaceous, in typical specimens crowded towards the ends of short branchlets, distichously spreading, base almost auricled on one side ; petiole very short ; stipules rather large, setaceous from a broad toothed base, involucres 1/30 in. long, campanulate. Styles very short. Capsule 1/18 in. broad. Seeds acutely 4-angled. I advance this as an undescribed species with great hesitation. It is undoubtedly the “Panjab, Lahore and Ferozepore” plant included under his E. Heyneana by Boissier (who has named some of the specimens E. sanguinea, others E. Heyneana), but I have seen no Deccan specimens, and I doubt its being the plant of Heyne seen by Boissier in the St. Petersburg Herbarium, and which I suppose is E. microphylla. Nor do I find the white sub-3-lobed limb of the gland described by Boissier. It is very near E. microphylla, differing in the long narrow leaves and locality, and more closely resembles E. sanguinea, Hochst. and Steud., of Abyssinia, but that plant has a distinct limb to the glands and large reflexed styles cleft nearly to the base. It is no doubt the Indian plant alluded to by Engelmann under E. prostrata (Torrey Bot. Mex. Bound. Exped. 187) as identical with that species, which, however, differs in the broad rounded fimbriate lobes of the involucre and distinct limb of the gland. Of Boissier’s var. scindica the specimens are wretched. I have seen no Mauritian specimens of this. 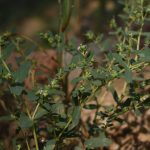 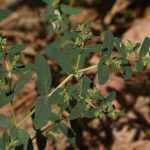 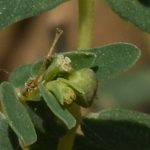 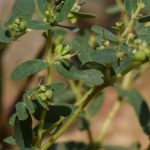 I could not find a proper match for this Euphorbia sp. on eFI page for genus Euphorbia. It is quite similar to E. hypericifolia in appearance but it is not a satisfactory match. Experts please help to identify this species. More photos will follow in replies.

This is not E. hypericifolia, but appears to be Euphorbia indica Lamk., characterised by terete internodes and ovate-lanceolate leaves with unequal leaf-bases

This Euphorbia sp. looks different from E. indica as well and it has been identified as E. clarkeana, on iNaturalist. So we should treat it as the same.