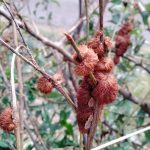 What is this, …?
Does not appear like fruits of Mucuna pruriens var. pruriens

Not sure about this sir

I do not think so. Wool like things appear to be coming out of long pods.

It may be insect gall developed from the pod.

it is not Mucuna; some fungal growth at nodes; pls observe closely

…, host plant should ve some Indigofera sp. This hairy growth appears to be some fungal growth.

I have also seen it in my area.

Yes its some plant pathogenic fungus. I have no idea about genus/species so far but i have observed same on Indigofera sp. plant few years back which i earlier thought to be some insect attack however i couldn’t find any trace of insect on closer examination.

Perhaps some disease caused by Phytoplasma.