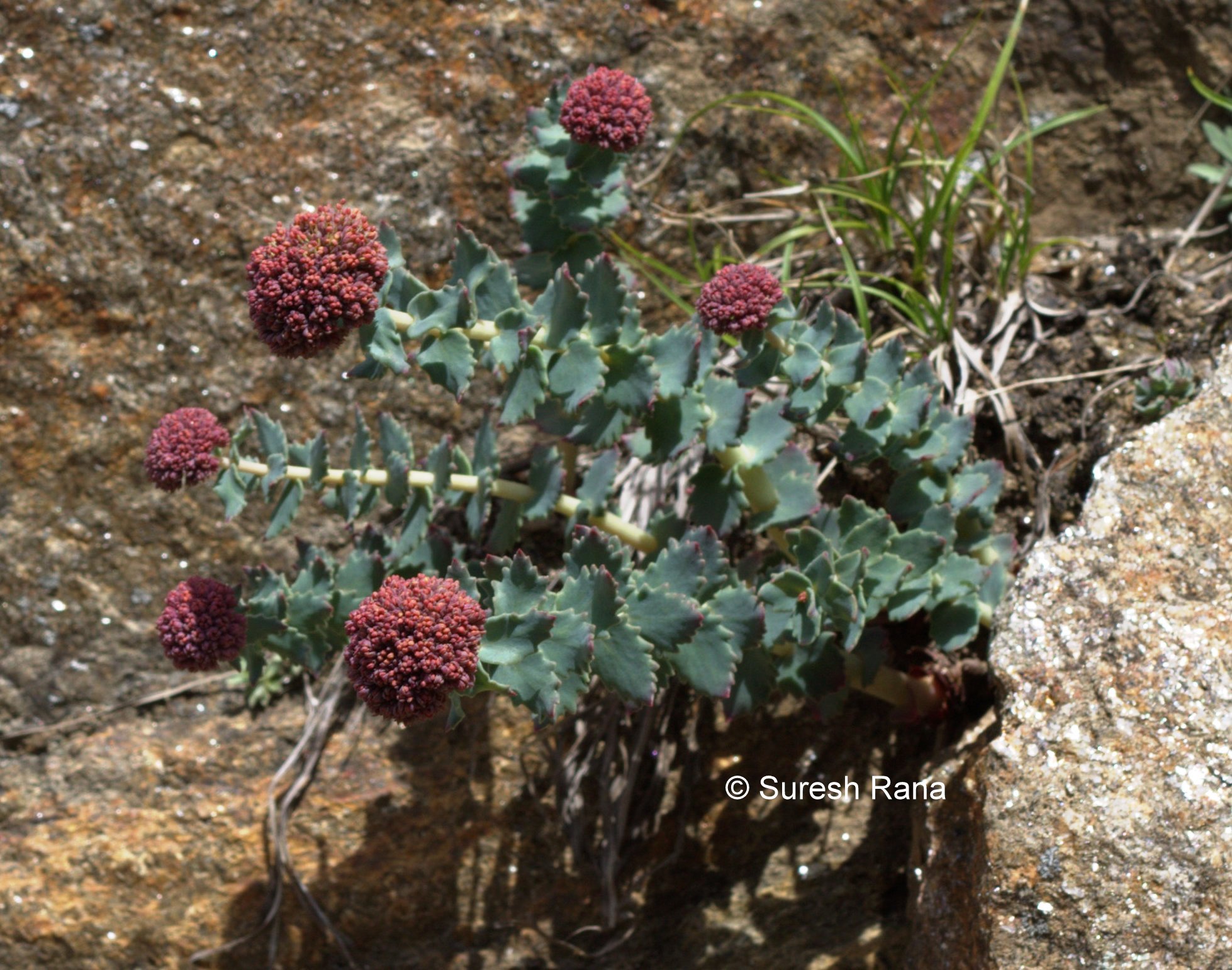 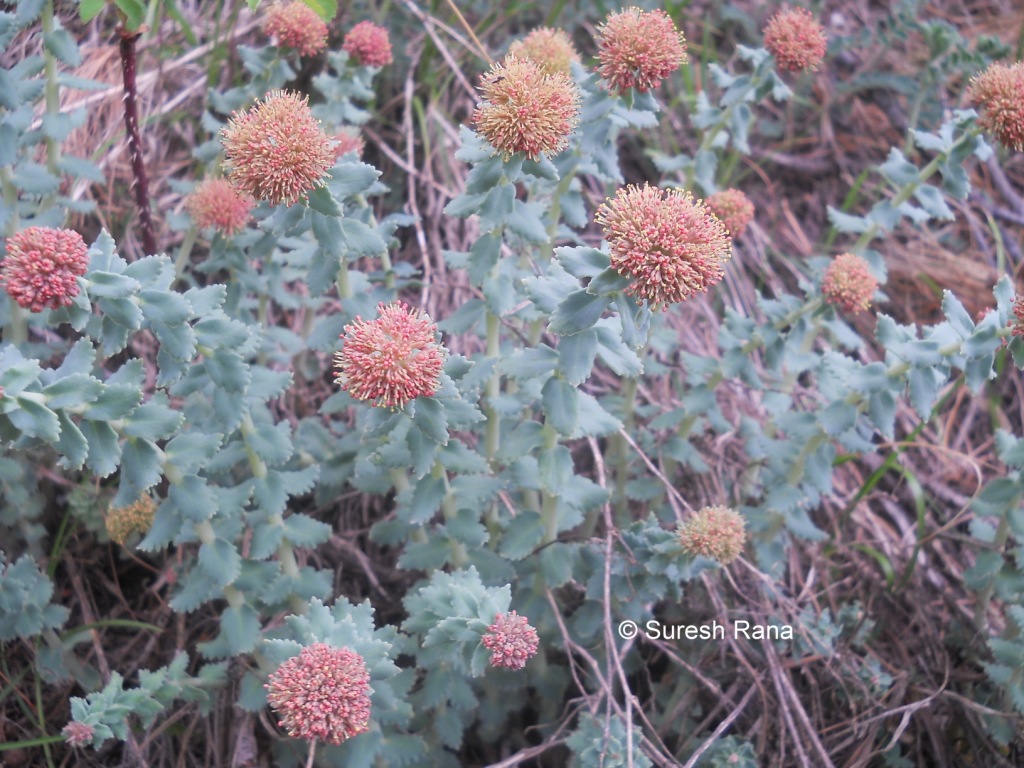 I am in serious doubt if it is R heterodonta and neither I know which species is it!

May I start be repeating that Rhodiola is an extremely difficult genus identification-wise. Misidentifications occur frequently. The situation is complicated by a lot of pressed specimens in the past being of poor quality which were badly pressed.  If one attempts to dry Crassulaceae in a normal way compared with specimens belonging to other families, the results can be poor, with all the leaves falling off!

I am making an effort with the Rhodiola genus in the NW Himalaya but am still not certain about a number of species- so cannot yet undertake a full appraisal of all posting on efi.  Hopefully, shall be able to do so at some stage in the future as the situation is in need of improvement.
Given the poor reference specimens (inadequate) in most Indian herbaria (and some other herbaria around the world) it is hardly surprising that something of a muddle exists.
With the advent of good compact digital cameras, provided those taking pictures in the coming years operate in a methodical way and take 10-20 images of each specimen from which they can select the best/most informative 6-10 to post, our understanding of this troublesome genus can greatly improve.  So please take more images of Rhodiolas in the Himalaya from 2017 onwards but please, not just 1 or 2 general shots not showing close-up detail.

As with pressed specimens for herbaria if scrappy specimens are collected in the first place and then one is faced with poor quality reference specimens in herbaria, the muddle will continue.  We need more and better close-up images of ALL species of Rhodiola in India (and other genera in the Crassulaceae family).
I have seen a number of false claims of Rhodiola bupleuroides from Kashmir and Himachal Pradesh- yet it is only recorded from West Nepal Eastwards!
The images taken by … match R.heterodonta– please note the second image illustrates that the stamens are longer than the petals (which when this characteristic is visible) is one of the features which distinguish it from R.bupleuroides (not that I am familiar with this species).
Stewart (1972) recorded R.heterodonta from 2400-5000m in Kashmir incl. Ladakh. I have seen it in Ladakh & Lahoul. Stewart knew it as Sedum roseum var. heterodontum.
R,bupleuroides is recorded in ‘Flora of Lahaul-Spiti’ as rare in rock crevices at Jispa. I have not seen the voucher specimen but I suspect it to be a misidentification.
The situation is complicated by misidentified images available on the internet of both live plants in the wild and cultivation and pressed specimens.
Please note that the following link referred to is a complete mix-up as the specimen show from Bhutan (as it correctly says on the label) is of a Phlomis which belongs to the Lamiaceae family and looks nothing like Crassulaceae! see: http://www.tropicos.org/Image/100177639

As for another link: http://www.tropicos.org/Name/8903316?tab=images. These show quite a number of images of mostly poor pressed specimens – have only glanced at them but they show more than one species of Rhodiola!
I am not impressed with this tropicos site – do not know who is responsible for it or the misidentifications!
Given how difficult the genus is, such completely unscientific contributions will only increase the muddle!!
Thanks, …,  In view of your remarks, image of Rhodiola bupleuroides in FOI from Valley of Flowers may be of some other species (may be of Rhodiola heterodonta only)
Pl. confirm.
Whilst I am confident the specimens photographed in the Paddar Valley come within R.heterodonata, I am unsure about the images on FOI you refer to, except to say I do not think they fit R.heterodonta. Cannot come up with a quick suggestion.
May I repeat that Rhodiola is an extremely difficult genus (hopefully there may be input by Sedum Society members in the months to come and what a pity the person taking a special interest in the genus has passed away).
I shall look into the genus in the Himalaya further in due course but at this point cannot meaningfully comment further.
Much easier to say what a specimen is not, rather than what it definitely is.  Will not help the situation of frequent misidentifications by prematurely commenting.
In some cases the characteristics visible in some photos are insufficient to be sure.
Another complication is that Uttarakhand, which I count as part of ‘Central Himalaya’, rather than ‘Western’ or North-Western, as I think makes the most sense floristically/plant geographically, has species which are not found in the North-West Himalaya (Kashmir/H.P.)   I know such species less well.

A wise starting point is for me to focus on North-West Himalaya, whilst commenting as best I can on plants from Uttarakhand, Nepal, Sikkim, Bhutan (whose floras I know less well) and have less reference material I can have confidence in.

So much in plant identification is about levels/degrees of confidence in an identification (or determination) not complete certainty.  And this particularly applies when naming from photos especially, only one or two, often not in good close-up which do not reveal diagnostic characteristics used in a herbarium.

Your site has so much potential but it is important that the level of accuracy of identifications is as high as can be achieved, for a number of reasons. There will be some senior botanists who may feel it is not possible to reliably identify plants on the basis of photos only.   For the sight to maintain credibility in the botanical community and “set an example for others to follow” accuracy and reliability is essential.
Another consideration is how the site is used, which I shall comment about further in the future.  The ‘Flowers of the Himalaya’ guide by Polunin & Stainton is of a high standard (though a few errors inevitably crept in) but I know how badly it is used by many people in the West and India.  All printed publications are out-of-date as soon as they are published.
People are not taught how to identify plants nowadays (were they ever, I wonder).  I studied Biology at school in the 1970s (to what are now GCSE standard with exams at age 16; A level with exams at 18 and a degree in botany but was never ‘taught’ how to identify plants).   Nowadays, in A level Biology plants are barely covered at all, let alone much if anything to do with field-work/skills or how tom identify them.
It is all very well having something of high standard if it is used poorly.  A fundamental point which needs to be put across is that one often cannot reliably identify a plant from a single photo by matching with a single image in a book (or nowadays a web-site).   Plants in the wild need to be examined more closely with more images taken per plant and with more than a single reference image being available on a web-site and these with trustworthy identifications.
In the past, it was only economic to have a single photo (or line drawing or painting) reproduced in a printed book and only 1 or 2 photos taken per plant in the wild(seldom in close-up) which was the best that could be done.   The situation has changed but this needs to filter through to photographers and users of your site.  I myself, have only realised the full potential of digital photography of plants in the past couple of years, so must realise that it will take many years before others recognise it.
This looks different from other images at Rhodiola heterodonta (Hook. f. & Thomson) Boriss.