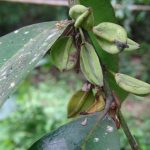 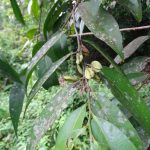 This could be a species of Drypetes

I believe your sharp eye detected this plant at generic level although such flattened fruits are very unusual in Drypetes! Could these be the hitherto unknown fruits of Drypetes elliptica (Hook.f.) Pax & K.Hoffm. described on the basis of male flowering material from Myanmar? Else this could be a new species as well! I have told the collector to try to collect the flowers which are required in arriving at a definite conclusion.

I cannot take any credit for guessing the generic identity of this species as I had also received the same image from the same source some time back, who had told me that you have tentatively identified this as Drypetes elliptica. I had not realised that it was you who had posted the image on the group to get an opinion from the larger community.
I however agree with you, I do not think it is Drypetes elliptica as the leaves dont quite match with the herbarium specimen at Kew.
I hope that we get to the bottom of this someday, since it is likely to turn out to be a new record for India if not a new taxon. 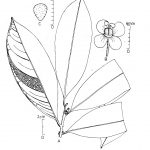 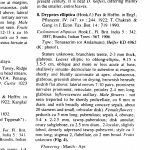 Here I am attaching the description and drawing of Drypetes elliptica (from our publication on Drypetes) mainly based on a sheet collected by P.T. Russell from Myanmar. Here we can see that the leaves are matching with the images of plant but the ovary is said to be subglobose in the description. Further, Kanjilal et al., Fl. Assam 4: 178. 1940 reported the occurrence of the species in India from North Cachar Hills on the basis of male flowering specimens but I have not seen their collection. Let us hope that “time will show” the actual identity.
2 images.

Leaves in these images by and large match with the illustration attached and GBIF specimens- one and two.
But the details of the fruits are not available in the description.
If it can be found and matched and other species found in the area are ruled out, it will confirm.