Clarke Comp. Ind. 199 ; herbaceous, hirsute puberulous scaberulous or glabrate, stem strict or slender, leaves polymorphous simple or more often lyrate-pinnatifid with broadly auricled bases or petioles, terminal lobe ovate or orbicular-ovate or cordate lobulate and toothed lateral small gashed or 0, heads ecalyculate irregularly corymbose on stout or slender peduncles, invol. bracts 12-16 1/6 in. long linear-oblong acuminate usually glabrous, ligules 8-10 broadly oblong, achenes quite or nearly glabrous or hispid slender equalling the dirty-white pappus. Doronicum Walkeri, Arn. Pugill. 32 ; DC. Prodr. vi. 322 ; Thwaites Enum. 167.
The CONCAN ; Bababoodan and Wattikely hills, alt. 5000 ft., Law, &c. CEYLON ; central province, alt. 5-7000 ft., Walker, &c.
A most sportive plant ; some of the Concan specimens are very stout, a foot high with a much branched stem as thick below as the little finger and leaves with the terminal lobe 2.1/2 in. diam. ; others have flexuous leafy unbranched stems with long petioled leaves reduced to the terminal lobe, others have oblong leaves 4-5 by 1 in., uniformly pinnatifid with oblong ascending toothed lobes. The Ceylon forms are often as stout, but more often slender, less branched and less leafy than the Concan ones, with sometimes a very few small elliptic petioled toothed leaves 1/2-1 in. long, without auricled bases, and the stem produced into a very slender forked scape bear¬ing 2-4 subcorymbose heads, on filiform peduncles. A very singular small apparently prostrate Ceylon form, probably growing in water, has slender stems emitting long roots, and rather recurved rhomboid petioled toothed leaves 1/4-1/2 in. long, and single or but few heads. The achenes are rarely as described by Clarke villously hairy ; I can sometimes detect only minute hairs, at others short spreading ones, and at others none at all ; they are about 1/10 in. long and contracted below the top. Clarke’s name is a very applicable one, but that of Walkeri should have been retained.
(Attributions: IBIS Flora (Flora of British India))
. 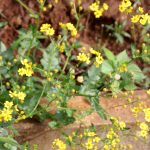 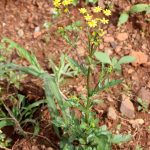 I checked more than 30 species listed in Flora of Peninsular India.

Closest I can go is Senecio ludens as per Flora of Peninsular India specimen from Chikmagalur and GBIF specimen- one and two (other specimens show quite a lot of variation)
Images appear similar to those of … kept wrongly at Senecio wightii in Flora of Peninsular India (also looks different from the specimen kept herein).
Senecio wightii (DC. ex Wight) Benth. ex C.B.Clarke is different as per images and details herein. 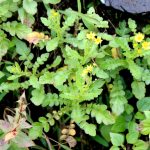 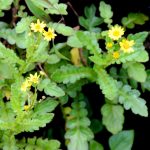 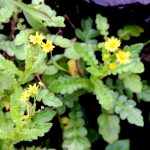 I think same (Senecio ludens) as at ‘Yet Another Compositae member for ID from Mullayanagiri Bababudangiri Road-GS15022022-4‘
Leaves and habit I thought are different in this one.