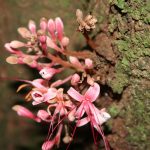 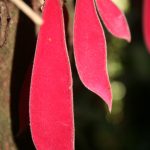 References:
POWO  Catalogue of Life  The Plant List Ver.1.1  ILDIS  GBIF (High resolution specimens) Flora of peninsular India  India Biodiversity Portal Wikipedia
Notes on the extended distribution of Humboldtia bourdillonii (Fabales: Fabaceae), an Endangered tree legume in the Western Ghats, India– Anoop P. Balan, A. J. Robi, S. V. Predeep- JoTT Vol. 11 No. 14 (2019) (Abstract: Humboldtia bourdillonii is an Endangered tree legume; considered endemic to its type locality in the Periyar Tiger Reserve in Idukki District of Kerala State.  A new population of this highly threatened endemic species is located in the Vagamon Hills of Kottayam District which is about 70km away from its original locality.  The newly located population is drastically affected by the severe floods and landslides that occurred in Kerala state during August 2018.  Urgent conservation measures are needed to protect the population from further loss)
Status and distribution of Humboldtia bourdillonii (Leguminosae), an endangered tree species of the Western Ghats, India- Ramachandran V.S.- Tropical Ecology 55(1): 85-91, 2014 (Abstract: Humboldtia bourdillonii is reported from the southern Western Ghats, India, but further information on its population and/or distribution is lacking, and thus the species gained the ‘endangered’ status of IUCN. In the present study, the type locality and adjacent areas were explored and population of the species was studied by laying 141 sample plots, each of 20 m x 10 m size. The study revealed that H. bourdillonii occurs in tropical wet evergreen forest from 450 – 800 m altitude asl, growing along and away from water courses in the Arjunan Kotta and Poonkavanam forest of southern Western Ghats. The species has a discrete distribution, found in seven patches, with an area of occupancy of 0.06 km2 and area of occurrence of approximately 2 km2. The species was well represented in all life stages and its estimated population in the Western Ghats is about 1310 individuals. Small size of the population, patchy distribution and small area of occurrence attract concern on the future)