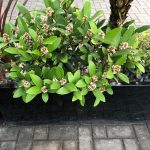 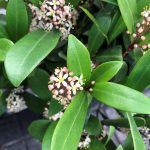 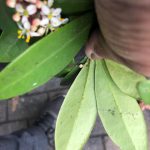 It is a Skimmia sp or named x cultivar.

I do not think so as buds are not red as per RHS.

But dozens of named cultivars./hybrids.
Recently saw a new one with variegated leaves.
Some are dwarfs, some normal size.
Some have red berries while others are white.
Life is too short to id one from another.
My pics below…mostly ones from old garden that we grew…hopefully accurately labelled
https://www.flickr.com/search/?user_id=11713966%40N02&sort=date-taken-desc&text=skimmia&view_all=1

Unable to see after downloading.

Here they are … sending in parts, as website does not allow more than 4 mb