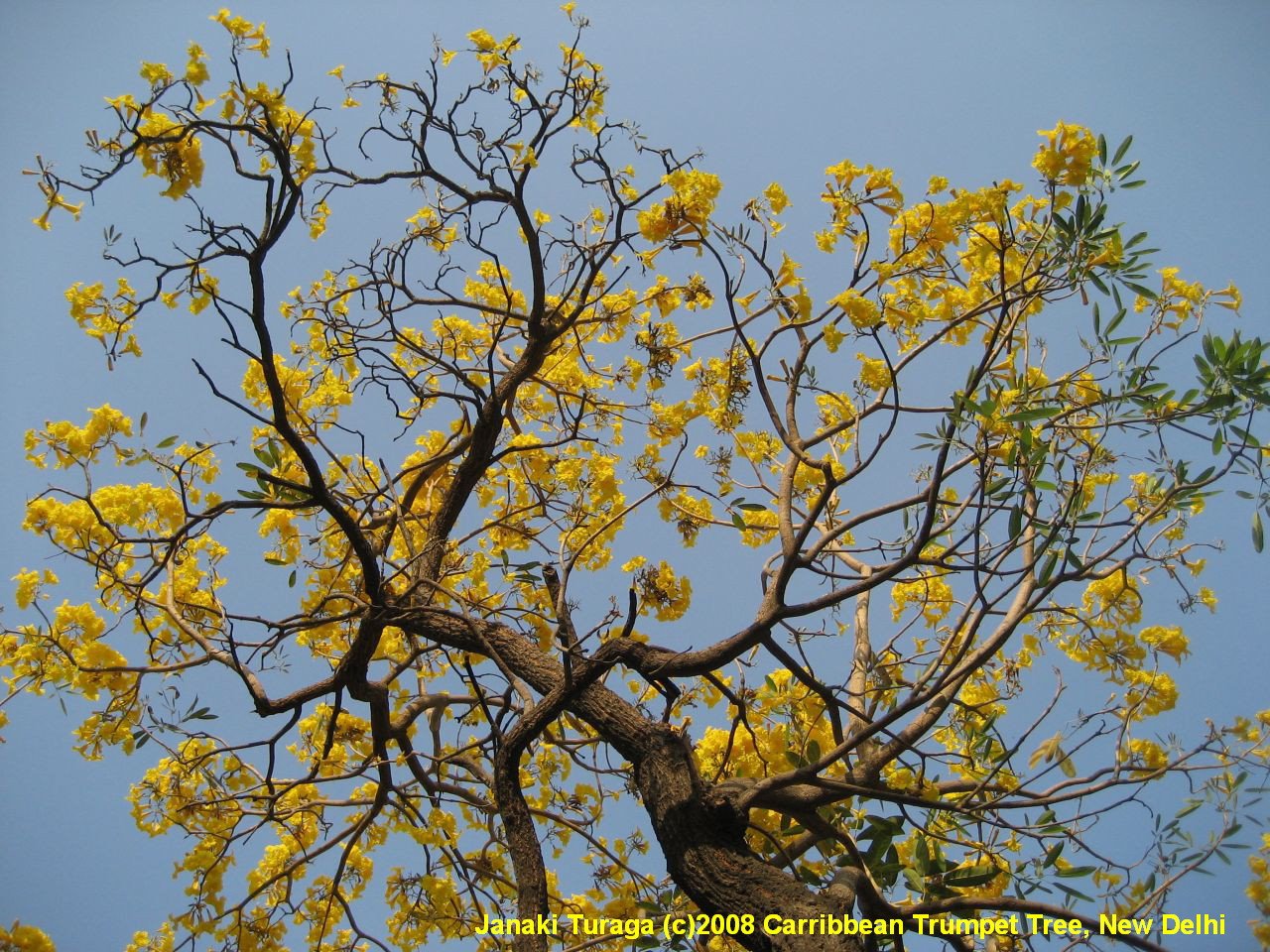 Hi all,
The Caribbean Trumpet Tree Tabebuia aurea which is a non-native plant of India, is my favourite shot of a Tree for 2008. This was a stunning tree in bloom with its vibrant yellow flowers in contrast to its dark brown broken bark and against the blue sky! This was shot in one of the very small parks in South Delhi which were part of my research area of flora and avifauna in an urban residential area.Though this was not posted to the group, I want to share this with all of you.
This is a tree of the urban horticulturists who use it to green the gardens in cities. One of the cities where this really proliferates is Bangalore along with the Pink Tabebuia which is another spectacular sight.
Another favourite of mine are the Floss Silk Trees-both White and Pink. Both are outstanding iand spectacular in their prettiness and wow value especially in Lutyens’s Delhi’s roundabouts!!
Enjoy
Janaki Turaga 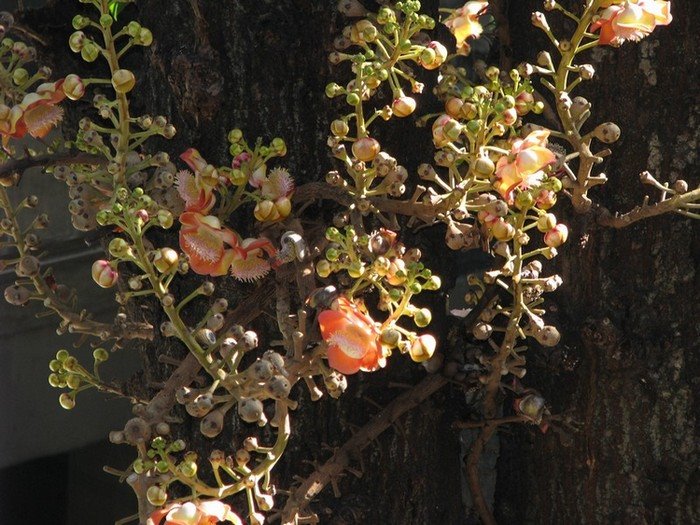 Couroupita guianensis
I would like to send this as my Flora picture of the Year [this has
not been sent earlier on this forum].
Couroupita guianensis. Fam: Lecythidaceae. Place-Bangalore-taken 11th April 2008
Also revered as Shivalinga, Nagalinga. The stamens form a ‘hood’ over a
small depression beneath, in which there is a ‘linga’.This tree grows
opposite my apartment & i’m sentimental about it because a friend & i
saved it from the axe.
The fruits look like cannonballs & are as lethal-only i have not come
across a single case of anyone being hit on the head [ that does not
mean anyone take a risk !]-surprisingly even when they dropped with
alarming frequency at the time the building in the adjoining compound
was being constructed & the roots were heavily damaged. The tree has
stabilised since.
Ranjini Kamath 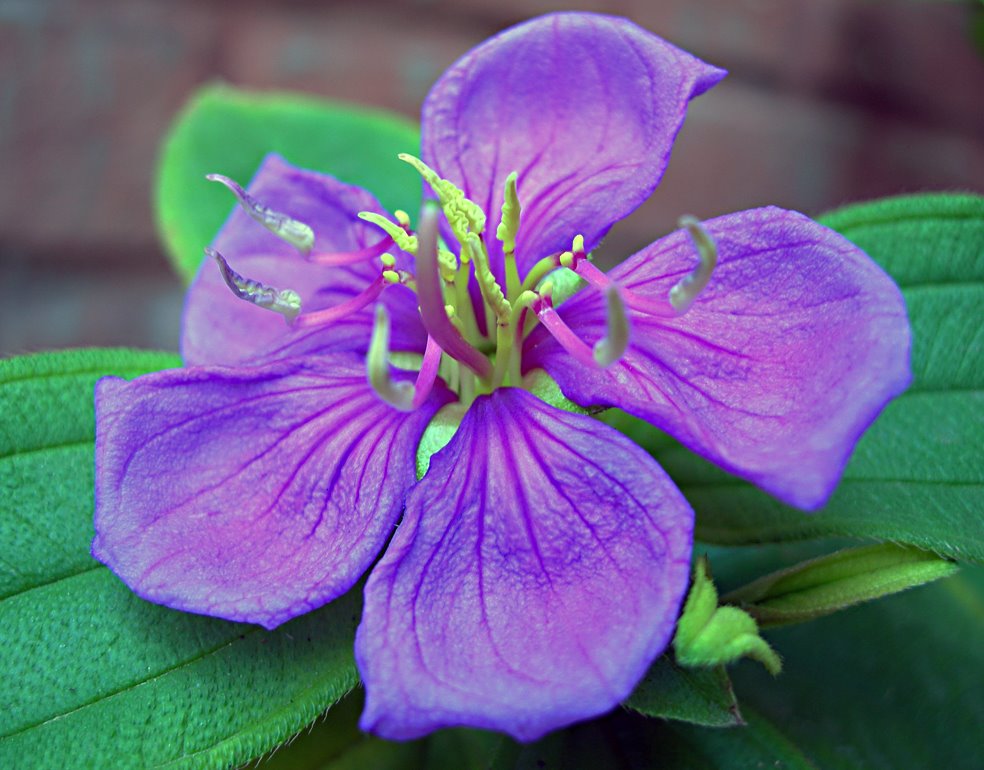 “TIBOUCHINA URVILLEANA” —
My vote for Flora Picture of the year- 2008
Our gardener has the most wonderful job in the world. We share a common love for exotic flora. He would go to any length to look for the best plants and flowers for me. He is aware of the indian common names while I know the english ones. So if I am unable to describe a plant or flower to him, I draw it out to him, or I collect some leaves and we both go a hunting spree to locate the plant or find the names and ID of the same.
He got me this plant last monsoon saying, he didn’t know the name of the flower but it is really pretty and purple and I would surely love it. For almost a month I watched the plant and nothing bloomed from it. I told him it had no flowers. He was glum, and vouched that he did see some flowers and I admonished him that he must be high on bhang. Just a day later the first flower bloomed in the plant and it surely took my breath away. When I showed him the photos he face lit, “mai na kehta tha”!
Me and my husband spend two whole days trying to look for its ID and viola I am sharing it with you now.
Cheers
Sangeeta Das 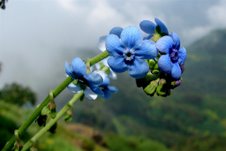 This is one the most beautiful flower
which I had photographed 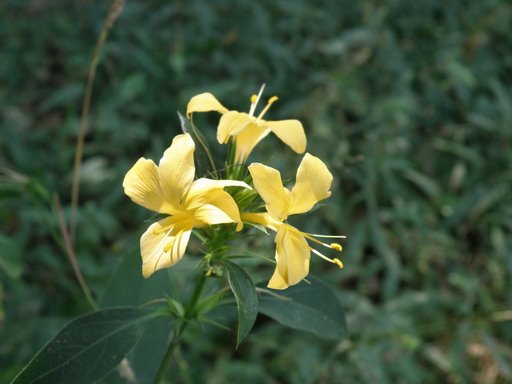 Barleria prionitis
This flower I would like to nominate as flora of the year 2008. This I shot at Phansad WLS, 200 Kms. from Mumbai. While shooting this flower, I got so engaged with it, that I did not notice that a green vine snake just passed by my legs. After, I was done with the shooting this flower, i realize that I missed an opportunity of shooting the reptile.
Rajesh Sachdev 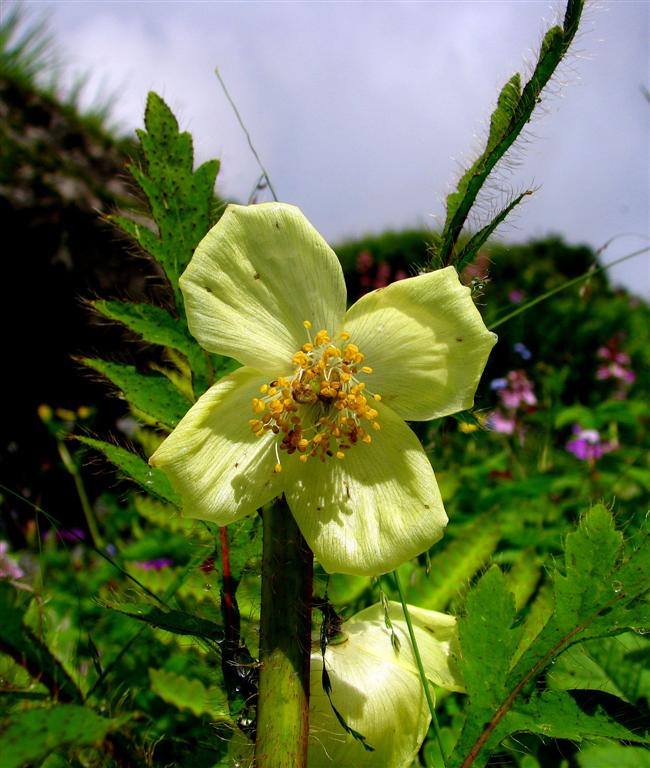 Hi,
This flower of Yellow poppy
Meconopsis dhwojii photographed at Kedarnath
Uttarakhand 23 Jul.2008.
Blue poppy is the main attraction of valley of flowers
but Yellow poppy is equal beautiful too.
Thanks
Pravin Kawale 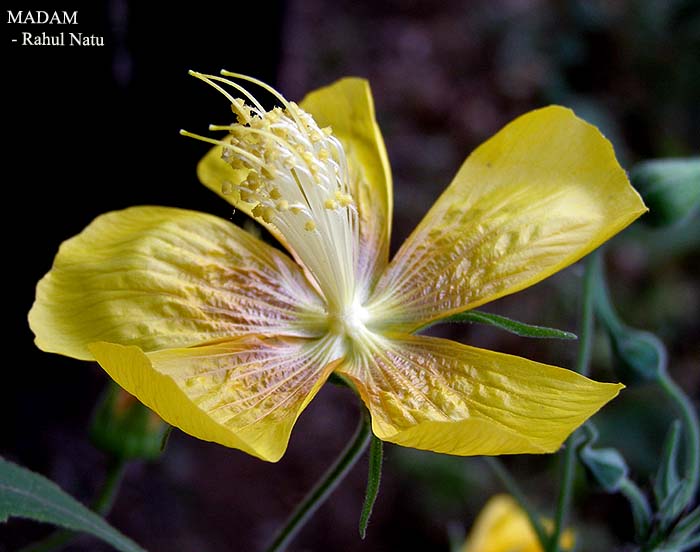 Abutilon persicum
Madam
In November 2008 during my trek thru Tirangi-ghat ( climbing down from Doni village
on the Ghats down to Rampur village in the Konkan ) among the thick KARVI,
suddenly I saw this one ..infact the only ONE flower on that plant !
Rahul Natu 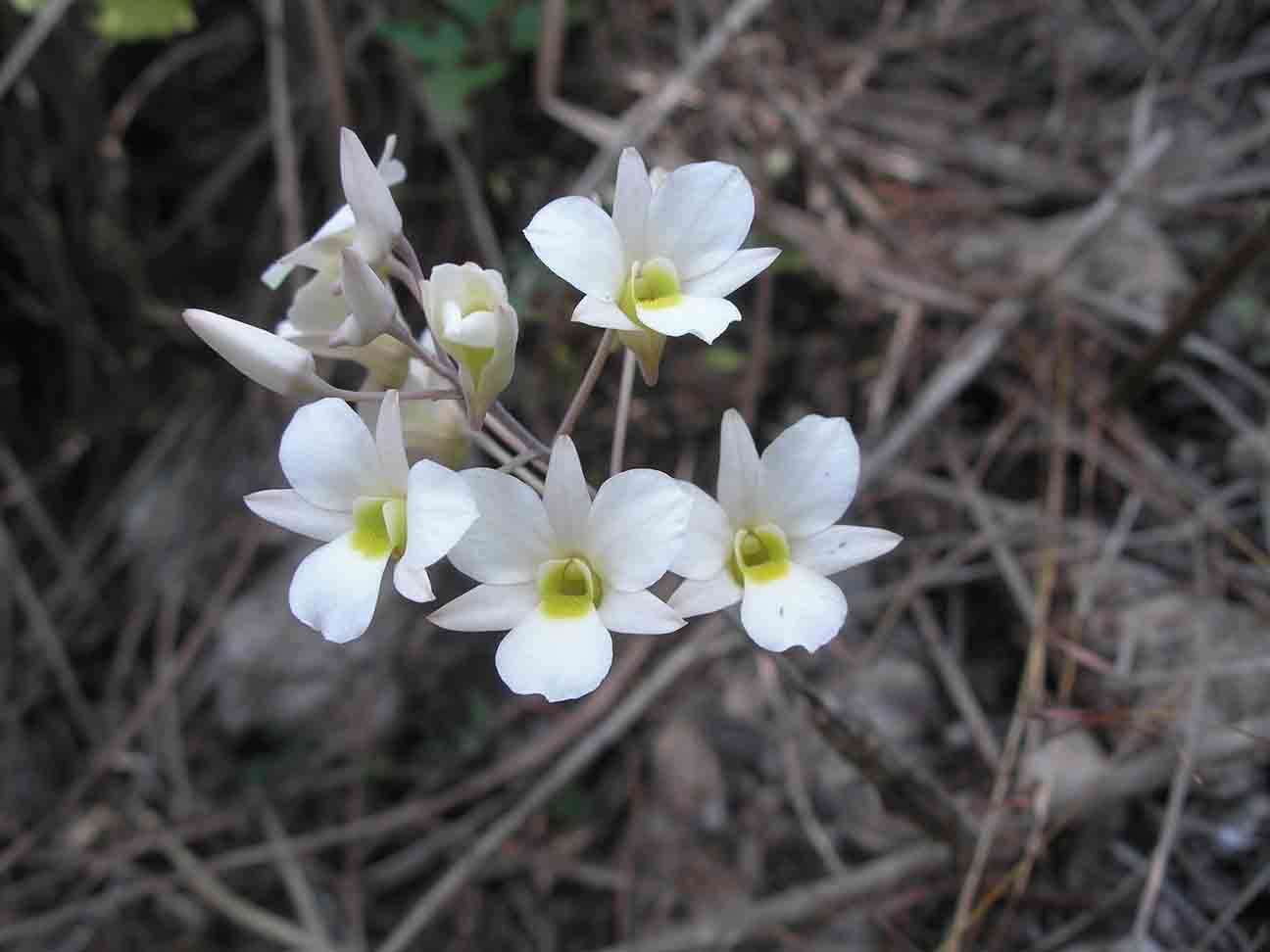 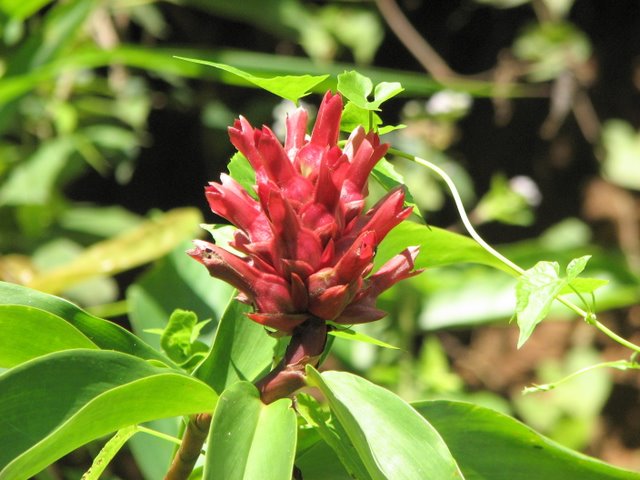 Costus speciosus.
Friends
I send this flower for the ‘ Flower of the year’
Place Mizoram , November 2008
Thiruvengadam Ekambaram 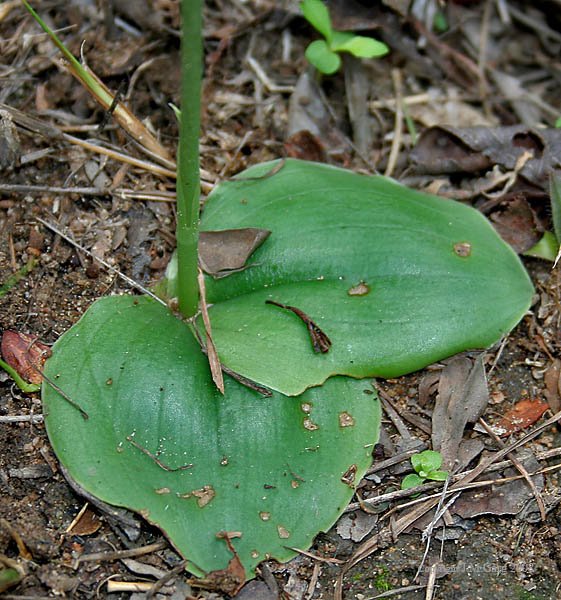 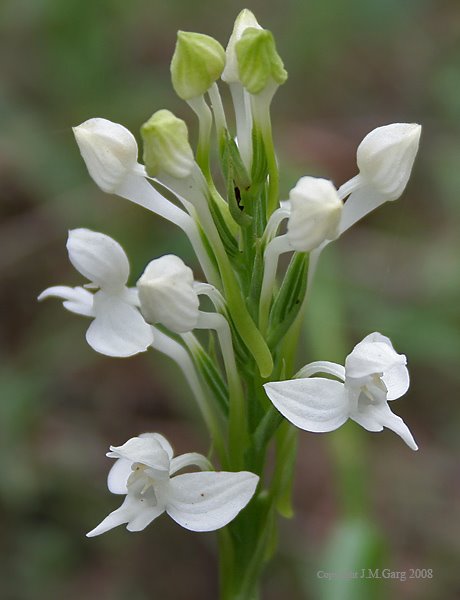 Habenaria roxburghii
Habenaria roxburghii syn. H. platyphylla in Talakona forest, AP on 16/8/08. It’s difficult to chose from so many species clicked in 2008. This was special for me as I was longing for finding some Orchid species (after seeing so many beautiful postings of wild Orchids) in Talakona forest being a rainy season (as Orchids flower only for a very small period during rainy season). I was not even aware at that time, though enamoured by its beauty, that it was a ground Orchid.
2008 was the year when I took to shooting of herbs in a big way. Before that I hardly looked at them. But the photographic beauties they have matches with those of butterflies, birds & other subjects.Welcome to the lovely world on beautiful herbs.
With regards,
J.M.Garg

This is my submission for the Flower of the Year 2008 (shot in Bangalore , one fine April morning) as I share with you the beautiful moment I experienced.
If you want a story, I have none. The sheer beauty of the “smiling gleeful duo” mesmerized me to pen this haiku….
In cool morning breeze
Waltzing on emerald floor
A blithe Cosmos pair.
Cheers
Prakash Swaminathan 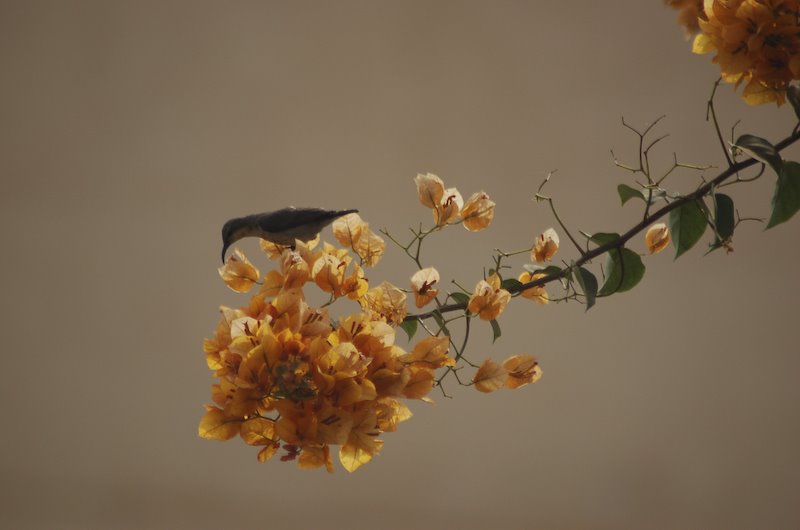 I am afraid the choice could have been better, but this is what I could find.
I like bougainvillea as it is hardy and shows off lovely bright colours. The petals are dry and from the face of it, one would hardly expect any honey inside the flower. But the sunbird knows best, and we have to agree. It is a frisky bird, and I was lucky to catch it in camera. But I know that it is not competition quality.
Best wishes, 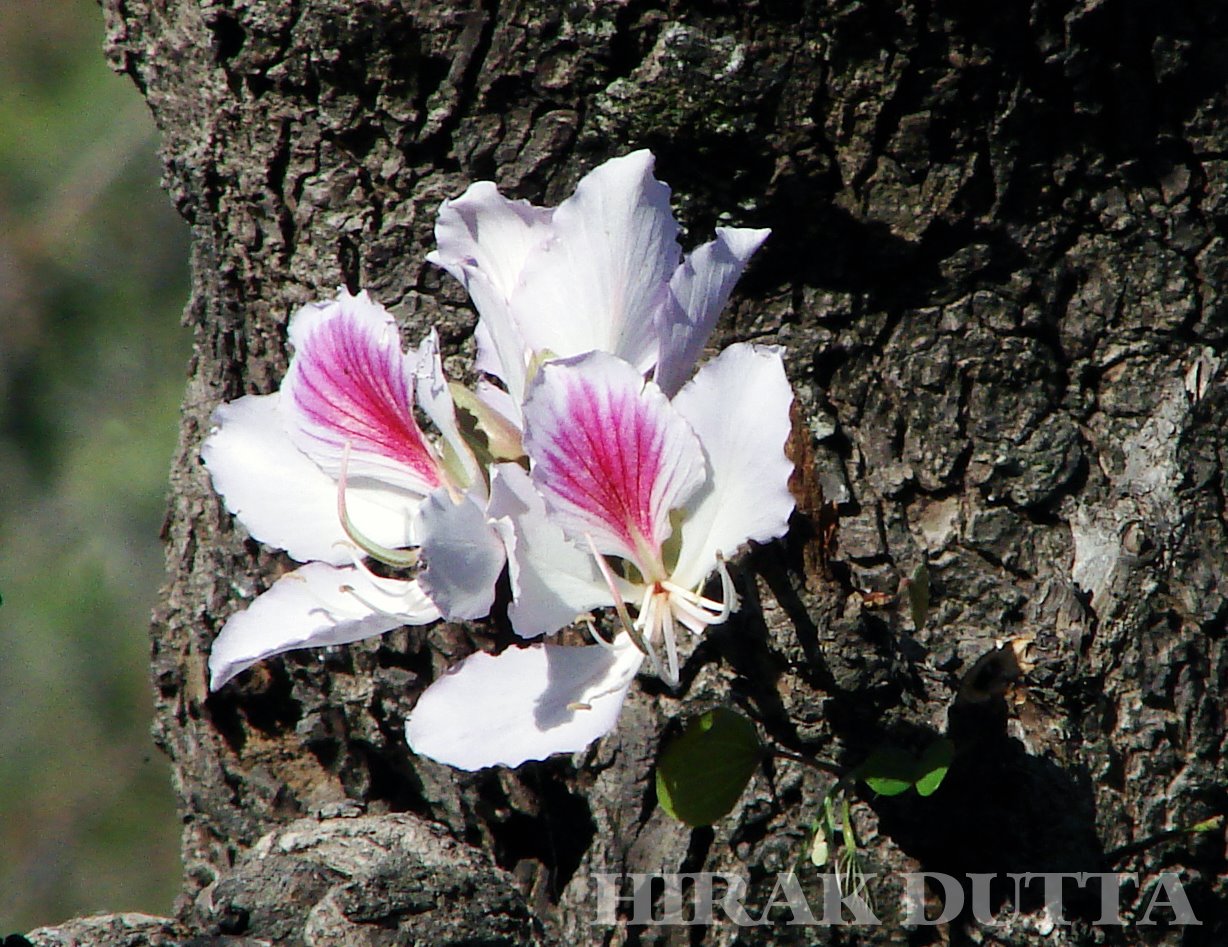 Dear all
This is my husband’s contribution to the list. photo courtesy Hirak Dutta
While coming back from Gangotri we spotted these wonderful “Kachnar” (Hindi) “Kanchan” (Bangla) , trees all along the hill side. What was most enchanting about these flowers were that there were no leaves on the trees only the flowers were clinging to the trunks, clumps and sinewy branches. Something like delicate damsels clinging on to their bodyguards…. Some times the entire tree looked white from a distance because of the flowers.
We had to trek a bit into the hills and zoom in with our cameras to get some good views. The most pretty flowers were in the most hard to reach trees on the cliff sides.
The contrast of the hard and cracked trunk and the delicate petals of the flower makes a wonderful picture… almost like yin and yang.
cheers
Sangeeta Das 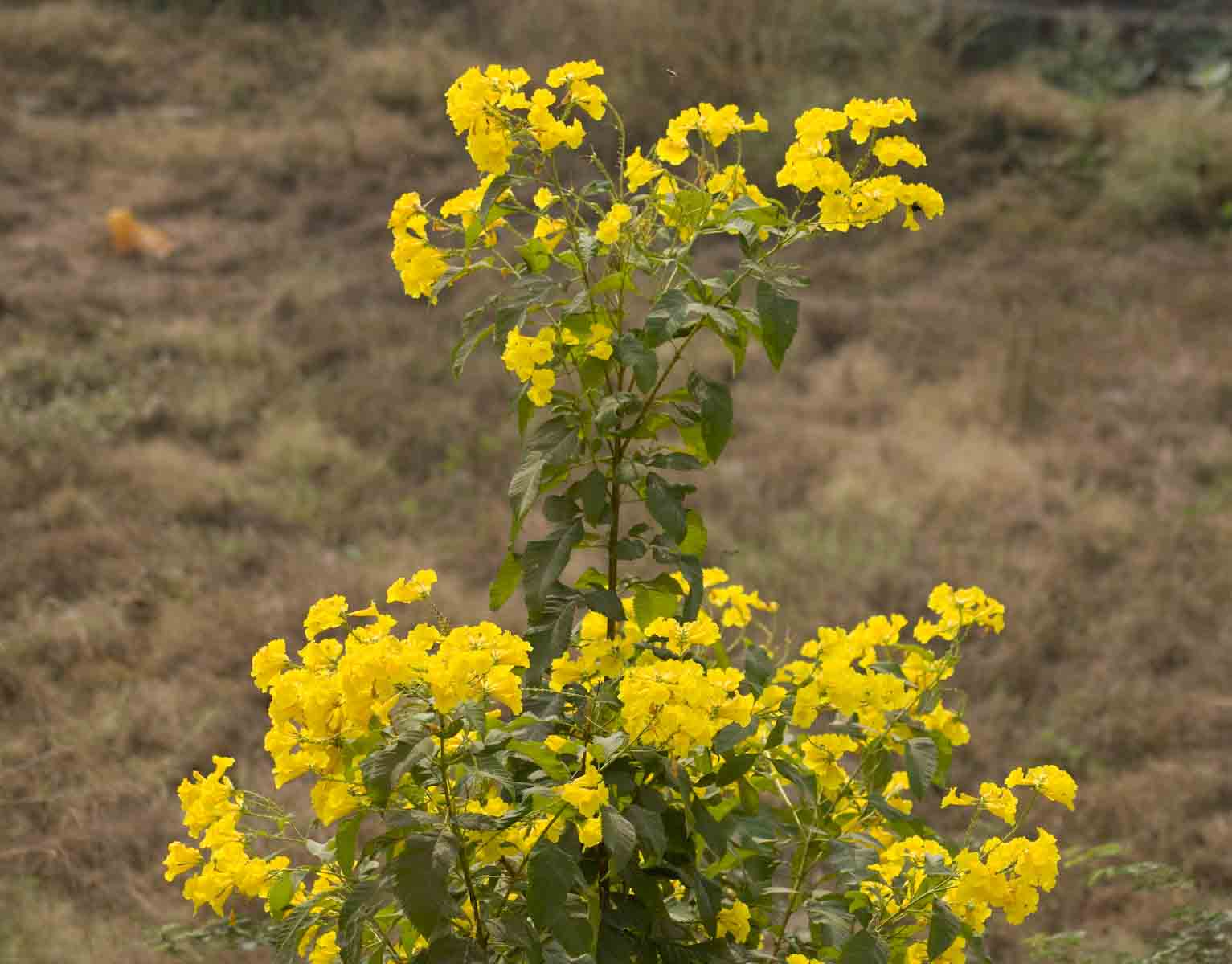 When I first planted a few plants of this bush I didi not realise its potential. But it grew fast and within a year started floweering. The bush is full, and the surprising part is the flush is not once, but 2-3 times. But the first flush is the best. I like flowers which are easy to grow, and quick to give result. And Tecoma gaudichaudi ranks fairly high in my list now. This is my personal discovery and so the flower of the year.
Best wishes, 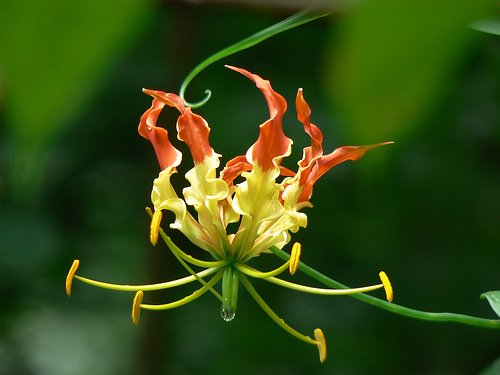 Sometimes the Stars, the Moon, the Sun — all of them are happy at the same moment — I mean happy with my photo-shooting skills.
One such moment: September 16, 2007 11.03am … clicked Gloriosa superba at Valley Park, Navi Mumbai.
Native of India (and south-east Asia) … a very different flower … colors blending from green to yellow to orange to red … and almost to scarlet … a very different plant of lily family … reaches out for support with help of its leaves … the leaf tip elongates to form a very slender tendril to coil around nearby support. 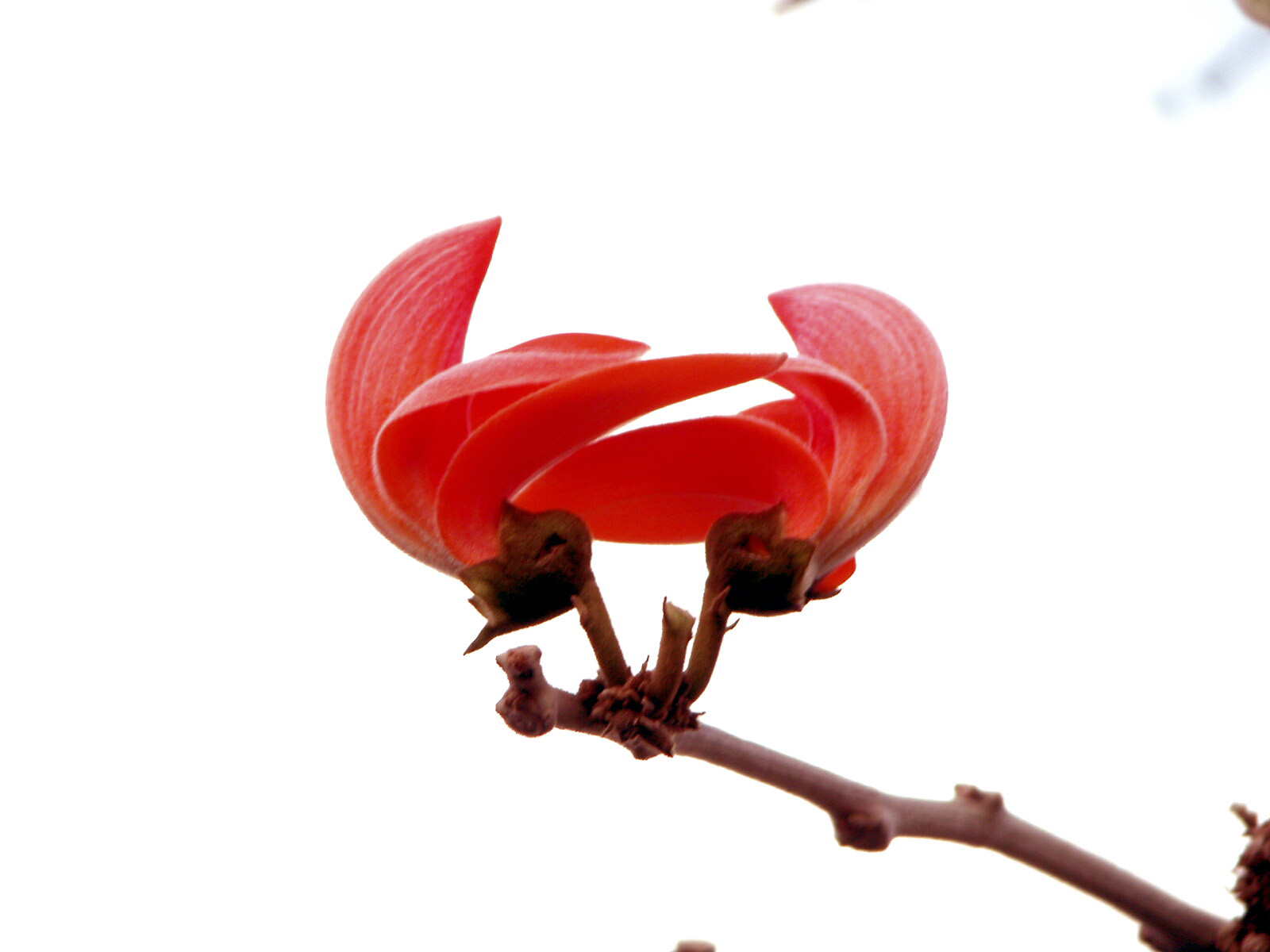 ButeaMonosperma
Palas or Palash.
IT IS NATIVE.
IT HAS BEAUTIFUL COLOURS AND MANY USES.
Dr Satish Phadke