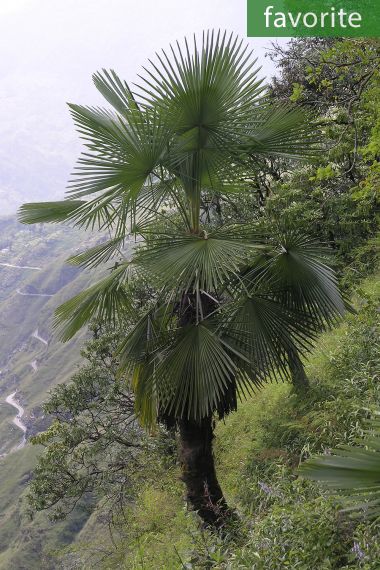 
Some seeds are available for a short time only. Don't miss them! To be notified by e-mail when this species arrives please hit the button above.
Please login/register first.

8 comments  |  Write a comment
Description Attributes Customer Comments (8)
This species is perhaps the hardiest of all Trachycarpus, coming from cool and moist oak forests in the Himalayas in Kumaon, northern India, to an altitude of over 2400 m (8000 ft.) a.s.l., perhaps reaching as high as 2700 m (8900 ft.), where the winters can be bitterly cold and snow is common. T. takil is most closely related and most similar in appearance to T. oreophilus and when older, has large, palmate leaves with even divisions and whitish undersides. It is most frequently confused with T. fortunei, however, but mature T. takil are generally taller, more vigorous, and larger in all parts. The three best features to tell the two apart are:
- The fibrous leaf bases in the center of the crown of of T. takil have no or only very short, frayed tips while the leaf bases of mature T. fortunei have long, straplike appendages.
- The divisions in a mature mature leaf of T. takil all go to approximately the same depth, while the leaves of T. fortunei are usually very unevenly divided. As a result, the leaf of T. takil has a neater, more clipped and manicured appearance than that of T. fortunei and resembles more the perfect leaf of T. martianus.
- The first true strap leaf after germination, the eophyll, is half as wide in T. takil as it is in T. fortunei, sporting usually only two rather than four folds.
There is probably no other palm that has caused so much controversy as T. takil over its identity and identification since its rediscovery in India in 1991 by Martin Gibbons and Wilko Karmelk. Countless confusions have marked that recent history. The palm was believed nearly extinct in the wild and unfortunately, very few true seeds actually ever made it into cultivation. Nearly all of what has been sold until about 2009 as T. takil came from cultivated sources and is actually a form of T. fortunei, widely grown in northern India since the days of the British rule (you can find this in our archive as Trachycarpus fortunei "Naini Tal"). Since 2009, several reports of sizable stands of T. takil in the hills above Kalamuni documented that the palm fortunately clings to life by more than just a thread and is not so critically endangered as previously thought. This is where seeds are now available from. Trachycarpus takil is undoubtedly one of the hardiest palms, as evidenced by its high altitude habitat. It receives considerable frost and snow there every year. Since the palm is so rare in cultivation, little is known, however, on its precise cold tolerance, but there is good reason to believe it will outperform Trachycarpus fortunei and may be on a par with the dwarf T. nanus and Rhapidophyllum hystrix.
Sort by: 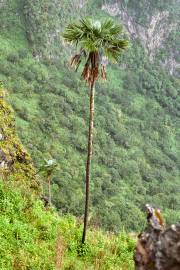 Trachycarpus oreophilus
Thai Mountain Fan Palm
From EUR 6.60
Out of stock
We described this rare palm as a new species (see PRINCIPES Vol. 41, No. 4. 1997) from a single mountain range in northern Thailand, where it grows on...
Customers who bought this item also bought

The #1 Web Site for Palm Seeds

At rarepalmseeds.com you can choose from the most spectacular selection of rare seeds in the world: palms, cycads, tree ferns, succulents, conifers, tropical trees and more, many not available anywhere else. Wholesale and retail quantities in packet sizes from two to 100,000 seeds are delivered worldwide. We supply enthusiasts and collectors as well as botanical gardens, nurseries and seed dealers of all sizes. Superior quality, viability and correct identification is ensured by renowned palm expert Tobias W. Spanner. Many new and rare species are constantly being added.

Unique climate based search for more than 1,000 locations.

Wholesale and retail quantities in packets from two to 100,000 seeds.

Worldwide shipping at low rates. We have shipped successfully to more than 180 countries. Express shipping available to many destinations.

Customer satisfaction. Many thousands of customer comments received over the years can testify to the quality of our seeds and friendly service.

Convenience: One-stop-shopping. With our huge range of species, you can get all your seed needs here and won't have to shop around.

Freshness: To maintain the highest quality standards, all incoming seeds are tested for viability. Stored seeds are checked on a regular basis. All recent arrivals are indicated as ‘new.’

Identification: We certify that all seeds are correctly identified and are only sourced from cultivated plants if we can be sure that they are not hybridised.

Experience: With experience dating back to 1987, Tobias W. Spanner is a renowned palm expert, leading member of the International Palm Society and has discovered and described several new palm species.