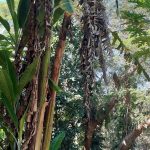 There is a long story behind this species. We have merged two of L.J. Singh’s species M. indandamanensis under M. sabuana and M. paramjitiana under M. balbisiana var. andamanica. The details can be had from the attached paper of us. This prompted L.J. Singh to merge M. sabuana with M. balbisiana, both have no similarity at all. He has supported his argument based on molecular data. M. balbisiana fruits and M. sabuana are entirely different. You can see it in our paper. This is almost like merging Curcuma longa with Curcuma aeruginosa.