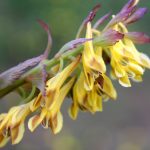 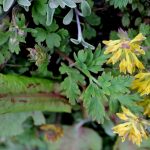 This is a young plant of Corydalis govaniana

It looks me Corydalis govaniana too

After the indication of Dr Magnus Liden it is difficult to say anything without specimens. He identified some of my Corydalis species including C.pseudo-juncea which proved as a new addition to flora of India.

I find it difficult to reconcile to C. govaniana, in which the the flower tips are never purple, very clearly seen in my specimens. The two west Himalayan species similar to C. govaniana in habit but with purple tips are C. clarkeir and C. gortschakovii (both formerly known under C. moorcroftiana) I seem to have seen these but the dull yellow flower colour of Tungnath specimens is something I have never seen earlier, though I seem to have collected both C. govaniana and C. moorcroftiana.
http://www.flowersofindia.Govan’sCorydalis.html
http://www.flowersofindia.Moorcroft’sCorydalis.html 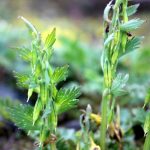 I am attaching picture in fruit also to give clearer picture
1 high res. image.

On checking the specimen in POWO, bracts clearly match with Corydalis govaniana Wall. (specimen) rather than those at Corydalis tibetica Hook.f. & Thomson (specimen)

Looks like Corydalis thyrsiflora Prain. No idea if Corydalis chaerophylla thrives at that altitude

Seems your guess is correct !

Key in Flora of Pakistan also leads me to C. pseudocrithmifolia, differing from C. crithmifolia in dissected bracts and shorter leaf segments.

Two pics of mine from same place same date.
Attachments (2)- 1 mb each.

C. pseudocrithmifolia is now considered as synonym of C. tibetica, both according to eFlora of China and Catalogue of Life,

This has already been identified as Corydalis govaniana at Corydalis chaerophylla DC. from Tungnath in Uttarkhand..Pl. validate by Dr Magnus Lidén, Expert on this genus.

…, last time also I had shown my reservations as I have collected C. govaniana extensively during my research days. Interestingly I had forgotten about this upload, and made fresh upload. I tried both keys on eFlora of Pakistan and BSI Flora of India, both led me to C. pseudocrithmifolia which is regarded as synonym of C. tibetica now. We may ignore other things, but can’t ignore length of spur which almost 3/4th of flower length, and much longer than lobes. C. govaniana spur is not more than half the length of flower. You may please check in illustrations as well as other images of C. govaniana on our efloraofindia page.

Is it C. govaniana or C. tibetica or some other species ?

I see lot of differences from C. govaniana in which flowers are bright yellow, bract narrower, mostly entire, spur smaller. Here C. tibetica (see my discussion above also) has larger pale yellow flowers, longer and broader distinctly cut bracts and longer spurs. I am uploading both for comparison and scrutiny.

I have seen all the images, we can’t ignore spur length. moreover bracts of C. govaniana are entire or cut only in uppermost part, in C. tibetica bracts are broader and cut in most portion, and very important pedicels are mostly erect in C. govaniana, strongly deflexed in C. tibetica. It is more important to compare with the original description in FBI rather than just images on websites. Another important difference C. govaniana mostly has many flowers in the inflorescence, C. tibetica mostly less than 12. Compare the two in my most recent upload in the thread.

And now the most important difference in addition to spur length. If you look at C. pseudocrimthifolia in eFlora of Pakistan the plants and leaves are mentioned as glaucous. Similarly when keying out C. tibetica (of which above is now synonym) the plants including leaves are described as glaucous, whereas they are green in C. govaniana. Another major difference is one pair of cauline leaves in C. govaniana, not so in C. tibetica where there may be 1 or nil cauline leaf. Moreover plants of C. govaniana are erect, prostate to decumbent in C. tibetica. I am sharing images of both for further comparison.