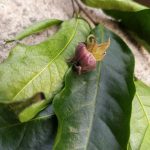 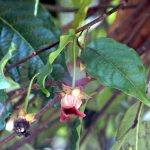 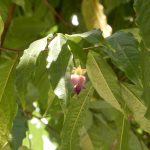 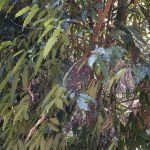 A tree found near a waterfall in Manipur. Found flowering in early April.
Elevation 700-900 m above sea level.
Any clue to identity is welcome.

Thanks … for the lead. The sepals (if they are really sepals) of my plant are quite large compared to what I see in the drawings in your links. But let me follow this lead and explore.

I think it is Miliusa codonantha, a species described in 2013. I am attaching a picture from the original paper, and another images of my plant. There (open access) paper is here:
Bioone
1 image.

The plant in the pictures looks in general like Miliusa codonantha I described, but the sepals seem slightly larger. Have you counted the number of stamens and carpels per flower? This can help confirmation if it is M. codonantha. 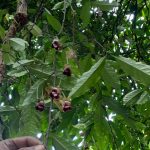 Can you post a high res. image and side view of the flowers?

Unfortunately this was a one time click while my friend was trekking to Siducharu falls in Manipur.
Google images shows a strong resemblance to Eunonymus occidentalis? Could it be Eunonymous species local to India such as Eunonymus assamicus? Unable to locate it’s picture though.

May I request you to pl. post the high res. image.

This was a quick capture during a trek. Will need to revisit and click a better resolution image.

Thanks a lot for this.
It appears to be newly discovered in 2011!
Found the discovery report here
https://bioone.org/journals/willdenowia/volume-43/issue-1/wi.43.43111/Miliusa-codonantha-Annonaceae-a-new-species-from-the-Indian-eastern/10.3372/wi.43.43111.full
More images here :
https://www.flowersofindia.Bellflower%20Miliusa.html