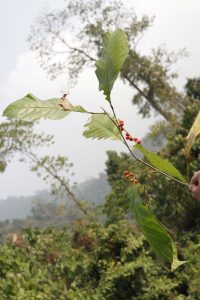 Thanks for identification sir. But this plant not matched with Embelia sp. It may belongs to Myrsinaceae (now primulaceae) kindly help in identification.

Embelia tsjeriam-cottam
The picture does not match with the ones on the NET ???

Another probability, might be Embelia gamblei Kurz ex C.B.Clarke (E. frondosa (King ex Gamble) D.G.Long) – https://www.gbif.org/occurrence/gallery?taxon_key=3720655, but, the leaf margin in this species would be entire, as per Flora-of-China & Flora-of-British-India).
After going through the keys in Flora of Bhutan as available at Embelia and GBIF specimens of Embelia vestita Roxb. and Embelia gamblei Kurz ex C.B.Clarke (E. frondosa (King ex Gamble) D.G.Long), I feel it is more closer to Embelia gamblei Kurz ex C.B.Clarke due to large size of the leaves and clear venation at the abaxial side of the leaf. I observed some serration in the specimens of this at specimen one and two. Also in the posted image, I do not see any serration in one of the leaves.
If I am to follow the KEY in eFI page, I agree with you, Sir, but the leaves in the submitted picture have more tapering apices and base.
Yes, the submitted picture does bear leaves featuring both having “dentate margin” as well as “entire margin”.