Wild plants seen on a mountain slope in Nasik.

Agave Species?
Agavaceae ??
Agave sisalana and A. americana.
Thanks for the suggested id. Which one of the two suggested Species? I believe all plants are the same.
Yes, sir, I thought too same, both are one sp. only.
Pl. check comparative images with keys at
/species/a—l/ar/asparagaceae/agave

Closest I can go with these images is Agave americana after perusing keys and details at species page, as suggested by …

Thanks … Is Agave sisalana be a Syn?

I maybe wrong but it looks too tender a plant to be Agave americana. Can you please upload high resolution picture of its leaves? 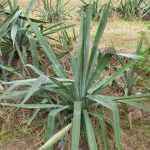 Here is the high resolution image. 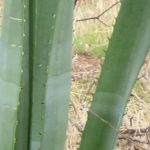 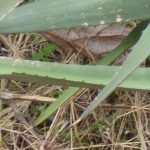 I am truly indebted to you, Madam ji, for this upload (and many other as well).

Last night while I was placing my wise (!!!) comments in several Agave threads I kept thinking that “nothing is getting cleared.” I kept asking myself, “which Agave has/have been naturalized in our country?”
I am still reading and studying trying to get a hold on Agave riddle. For gathering information I visited “lucidcentral, KEW, Flora of China, Pakistan and North America sites”. I couldn’t find any other resources. What I could gather I surmise below :-
So, this species is either no.3 or no.5 (and maybe no.4 to some extent).
In the attached pictures, cropped from your original plate, you will notice that the prickles are = some straight and some pointing upwards = if you apply FoP KEY, this species would be A. cantula Roxb.
I thank you once again for your generous help.
5 attachments
Thanks for showing interest in my earlier post.
Frankly, I will never have the patience to go so deeply and try to find the id.
Great observations from you.
When I revisit the place, I will take more close ups for sure.
Recently, there was mass blooming of Lilies after the first rains near this spot on the mountain slopes which I missed being out of town.

A request, Madam ji, when you revisit the place please take macro photographs of marginal prickles and some apical spines. I think the prickles (some) are falcate too, and even some of the apical spines are acicular! 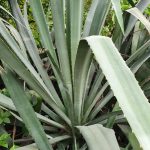 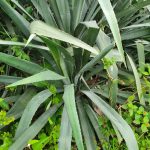 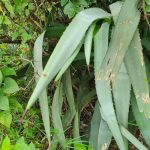 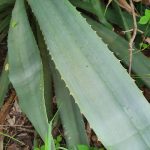 Although this post has had a lot of discussion and has been already identified by … as Agave americana, adding more pictures taken at Borgad Conservation Reserve.

These were growing at a number of places on the mountain slope.
This mountain is in the same area where the earlier pictures were taken.

This was identified as Agave vivipara as per details herein by …

Later … had identified this as Agave americana.

I had promised to take more pictures.
Find these in a number of places on mountain slopes.

It would be very helpful to know where did I go wrong with the identification, I* suggested.

On one hand it is A. cantula (A. cantala, syn. A.vivipara) or”Bombay Aloe” to me and on the other hand it is A. americana to Anil ji and others!
Well, I just followed the Flora of Pakistan KEY,as we often do this and the other, FoC,for our identification.
If there is some other way to identify an Agave I would much appreciate it to be informed of the same.

You are right. I had not seen your identification before my comment.

Taking it as Agave vivipara.

plant for ID : 8 posts by 4 authors. Attachments (2)
this plant is photographed in hamirpur H.P. , growing wild, agave or yucca, not sure, Which Species? Any Idea pls

spines along the edges  are visible (in a small section of the picture only) so its Agave. yucca is spineless. so next time pay attention to leaf thickness, end pint, and edges
Is it Agave americana?

Leaf thickness and width rules it out I think, …

I would like to go with Agave americana L. as per comparative images at Agave‎ and keys herein.

the leaf is not robust enough. look at these
2minutegardner
Scientificlib
the following url shows pictures with cross sections of the leaves. I call that ROBUST … thick… leaves
https://mowryjournal.com/2013/06/18/agave-americana/

===
the presented plant is agave thin leaved. thin enough to flop over. not Agave Americana. sorry to bring a negative opinion

Thanks, …, There are lot of mis-identification in these species. We have to follow keys at Agave

Please make sure Agave americana can grow wild in our country, because as per Botany of Bihar and Orissa, only Agave vera-cruz was more or less naturalized (in Singbhum). And I agree with …, americana is a robust plant.

I still do not know if  Agave americana has been naturalized in our country or not. Even if it is naturalized, there must have been some mother or grandmother or great grandmother plant nearby.
However, as per lucidcentral, (1), the leaves of A. americana are not flexuous, that is why they bend at the tip region only, but leaves are flexuous in A. cantula. (2) the colour of the leaves of A. americana are quite different than any other Agave species, how can I describe it …. like kind of stonewashed or stony textured.
I think, in the 2nd picture, some of the apical spine, though not clearly visible, can be called acicular.

So, I would suggest A. cantula Roxb. for this specimen. Of-course, in that case too, there must have been some mother plants somewhere nearby.

Please, also note, leaf base in this specimen are not significantly fleshy (thick).

I forgot to tell you that I found KEY to three Agave – https://keybase.rbg.vic.gov.au/keys/show/7710 and saved a screenshot following the steps thereon.