Assam (Manipur) to Bangladesh, Borneo (Sabah) as per POWO;
. 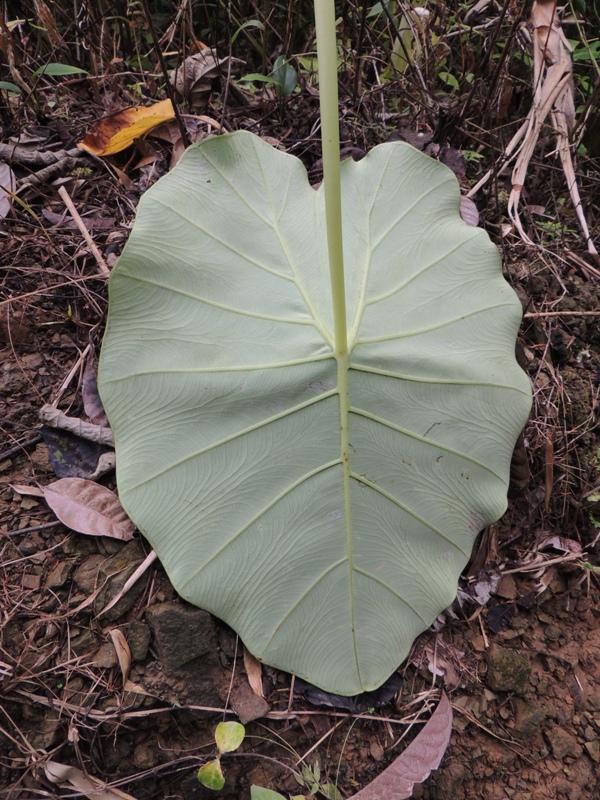 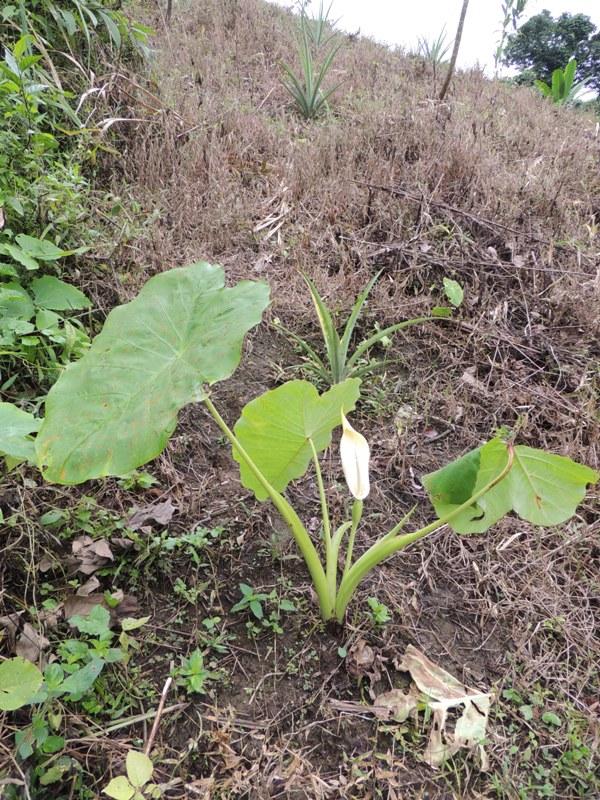 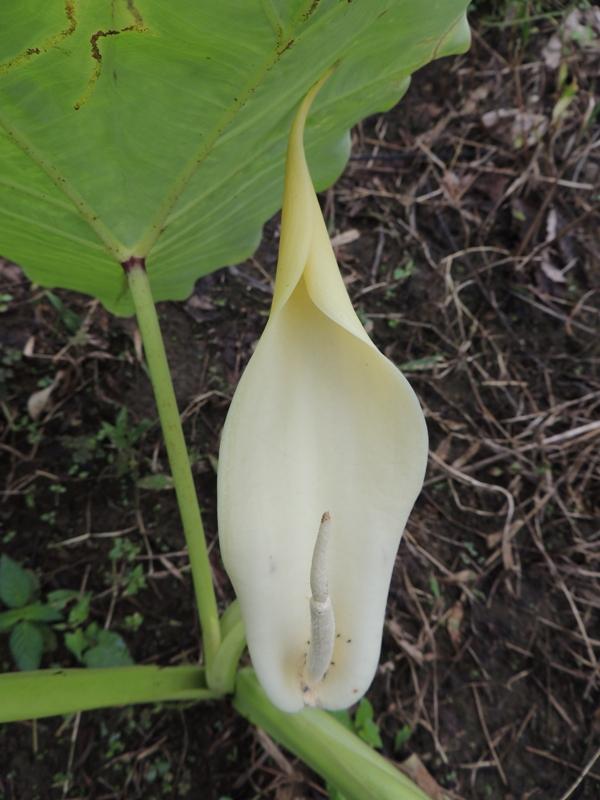 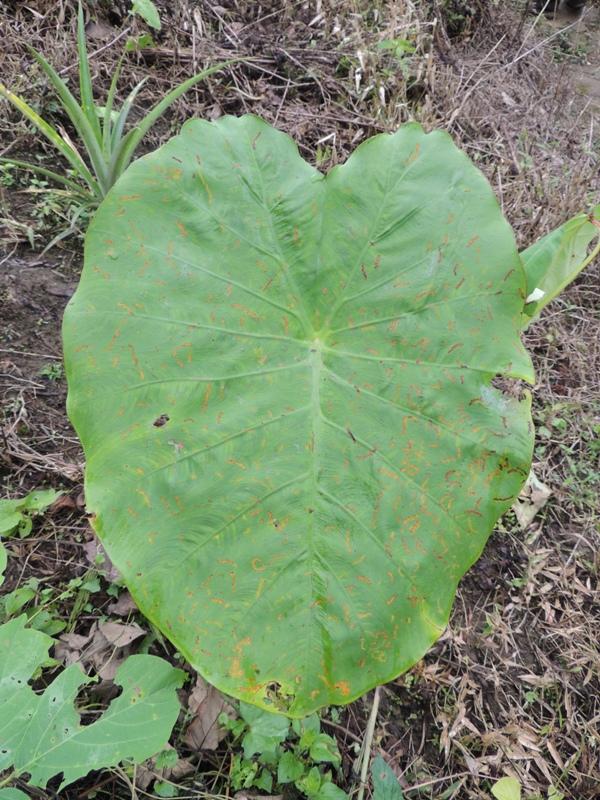 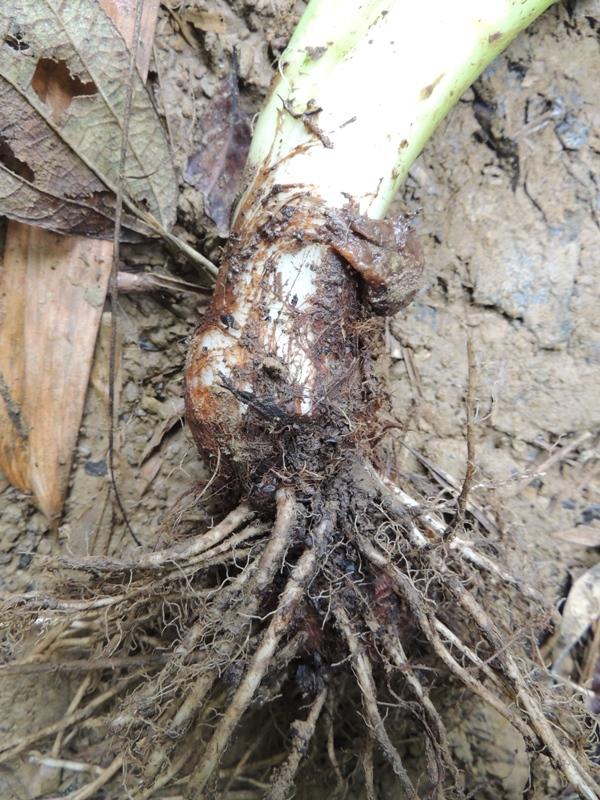 Rhizome of the same sp. Attachments (1).

To me it is Alocasia odora

“Spadix equalling the cymbiform spathe….” – Roxburgh.
“Appendix ……. markedly thicker than male zone at base” – FoC
There is one A. odora (Lodd.) Spach – don’t know this one, where appendix looks different, and much less than 1/3 rd of the spadix length of Roxburgh’s plant.
Such a much shorter spadix than the spathe limb is unlikely to be any Alocasia, unless new species has been reported from the region.
I have similar Colocasia leaves, of-course not polished.
Attachments (2).

Your two last pictures are of course Colocasia esculenta.  Are your 1st pictures the same as the last two?  I saw that your 3rd picture is shiny so I guess it was A. odora. Next, could you please see the following pictures.
Attachments(1)

I have posted only two pics (prefixed with “P”) in this thread, rest are from … Both my leaves are not shiny or polished, they are of Colocasia esculenta. I am attaching those image again.
Surely, … picture no. DSCN1594 shows somewhat polished leaf, otherwise I would have identified … plant as  C. esculenta.
Attachments (2).

Nevertheless I am not telling that … plant is C. esculenta.

Please check probability of C. antiquorum Schott for this plant.

Since your pic DSCN1593.JPG, in original post shows one somewhat polished leaf (please note … comment in the thread) and spadix considerably shorter than spathe limb, limb open above base, I think it satisfies the description and illustrations of FoC.

Is it Colocasia antiquorum ? 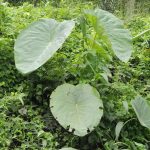 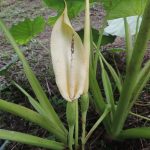 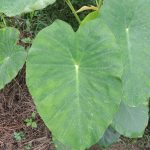 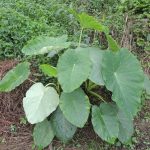 Same pic. of Colocasia. A perennial herb, up to about 1.8 m. tall. It grows well in damp shady places. Attachments (4)

Thank you for more photographs. I still think it is Colocasia, cf. C. antiquorum Schott.

…, this linked pdf is not directly related to this post but it gives an account of edible wild species around your region. 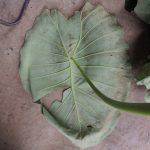 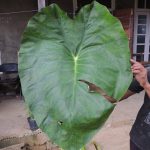 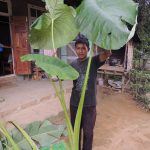 Thank you very much. Maybe … is correct, please check for brain like pattern (labyrinthine network of fissures) on the appendix, that would confirm if it is Alocasia.
3 images.

fascinating details
brain like pattern on top of corn like rows…
i think this is nature never forgets a pattern it makes, and reuses it if it worked the first time
like there are sea  corals that have the same kind of patterns and rounded/mounded surfaces… often their surfaces are blue and become a collectors items for rich aquarium owners…  and so declined…
ps now that we have talked of this here I’ll at least never forget the diagnostic point

Yes …, I have read (and have forgotten too) about corals in a zoology paper, but never had this vision. Thank you very much, my brain now seems to have started perceiving the amazing way nature works.

Both POWO and CoL treat Colocasia antiquorum Schott. as a syn. of Colocasia esculenta (L.) Schott

I was following “Flora of China”, Sir

Then it’s your call, Sir ji.

OK Sir ji.
It’s interesting to note that there is a Colocasia that has somewhat shiny adaxial leaf surface.

This species is probably Colocasia oresbia A.Hay.
An account of this novel species can be accessed at KEW and a paper from Bangladesh (https://pdfs.semanticscholar.pdf)

Thanks, …, for id as Colocasia oresbia A.Hay.
You may be right as per Publication, POWO and GBIF.

Since you too agree, …, I think the id can safely be accepted.