Erigeron annuus is a herbaceous plant with alternate, simple leaves, and green, sparsely haired stems. The flowers are white with yellow centers, borne in spring through fall.
(From Wikipedia on 12.5.13)
.

This individual was shot from Shimla.. can this be Erigeron pulchellus?

It is Erigeron annuus.

Seen at the roadside growing wild.

How many plants in this picture:

Three already identified by … Others-
Viola sp.
Cynodon dactylon
Oxalis corniculata
Galium sp.
and A grass too.
Believe me, I was trying to identify the Asteraceae flowers!

ID OF THESE WILD FLOWERS ON BEAS BANKS AT KATRAIN (MANALI) : 6 posts by 3 authors. 2 images.
Could the learned members of the group establish the identity of these flowers growing wild on the banks of the river Beas at village Katrain (30 minutes enroute to Manali). The flowers were in close proximity to the river’s rapids and were photographed on June 27, 2014.
Any background information on this flower would be welcome.

Thanks for following up, … The identity was settled by …, and I featured this in my Sunday `wildbuzz’ column in the Hindustan Times of July 6, 2014. The online link is below.

It is erigeron annus

I took this picture a week back and assumed it to be Daisy Fleabane or Erigeron bellidioides.
Could you please confirm?

It is growing aplenty on mountain slopes, its flowers magnets for some butterflies.

but can we know which mountain slope, which state please thanks and how high was this plant

Thank you … This is taken in Dharamshala, Himachal Pradesh at an altitude of roughly 1700m. This wild plant grows in rough clumps and is usually about 2 to 3 feet tall.

Yes Erigeron annuus. It has spread rapidly in recent years in Western Himalayas.

The heads look like E. annuus but lack the broader greenish-yellow disc.

I take it finally as Erigeron annuus only.

Seems to be Erigeron annus

I could not find it listed in Nepal list but it was shot in the wild.

Is it the same ? FOI

Yes, to me also appears close as per images at FOI
The Plant List has listed E. annuus and E. heterophyllus as separate accepted IDs whereas the FoI has listed as synonyms and the Google showing two different plants for above names.

Plant List
Erigeron bellidioides (Buch.-Ham. ex D.Don) Benth. ex C.B.Clarke Accepted
Erigeron bellidioides Spenn. Synonym
Eflora Nepal
Erigeron bellidioides (Buch.-Ham. ex D. Don) Benth. ex C. B. Clarke
It is something like Algebra calculation😁😁
As per Flora of China, Erigeron annuus (Linnaeus) Persoon is native to E North America; widely introduced worldwide.
Also as per BSI Flora of India, distribution is given as India: Himachal Pradesh, Uttar Pradesh, Sikkim and Meghalaya; Canada, Europe, United States of America and China (A very variable apomictic species, cultivated or naturalised in some places).
In efloraofindia, we also have observations from Kashmir & Uttarakhand at Erigeron annuus
Thus it is possible that it also got introduced in Nepal, being the area in between these states.

No, it is not like this.
Erigeron bellidioides Spenn. is a synonym of Bellis annua L. as per The Plant List Ver. 1.1 based on data from GCC.
Pl. see more details in GCC 2

All IDs showing different plants however names are linked through one another portals. Anyway, it is decided as earlier and looks a new to Nepal, may be!

It does match with your suggested id Erigeron annuus.

E. annuus could be considered.

I guess E. annus is the correct ID.

Symphyotrichum pilosum from Yamunanagar for Validation-GS21022020-1 : 8 posts by 2 authors. Attachments (2)
This erect branched herb was clicked from along roadsides in Yamunanagar, Haryana on May 24, 2015.  I hope it narrows down to Symphiotrichum pilosum, it has been reported from J & K as per Flora of India 12:99, 1995, but listed as excluded species, because being perhaps escape from cultivation. Related species S. ericioides has spine tipped phyllaries.
I am having doubts as per close up images at Minnesota Wildflowers as phyllaries appears to be different.
May I request you to pl. post original of 1st image.

Yes, it looks different and is not Symphiotrichum pilosum

I had posted this common picture on Indian Flora facebook, with this plant on right, I am also sharing plant on the left still unidentified. I agree ray florets are much narrower in my right plant shared above, could be some Erigeron.
I am sharing another plant separately also.
Attachments (3)
Reply in from another thread:
Rather my other upload which I suspect Symphiotrichum pilosum is more closer to E.annus

Manueal of the Alien Plants of Belgium
Frost Aster

These are rather two populations not very far away, one with  very long florets and  one short ray florets . They look different.
Help with ID perhaps Erigeron from Yamuna Nagar to Renuka ji Road-GS28022020-1 (google.com)

I am not getting convinced.

But that is the correct possibility, I am getting at this time.

Thank you … It is difficult for me to find the sp. which are not listed in the book and ACFPN. 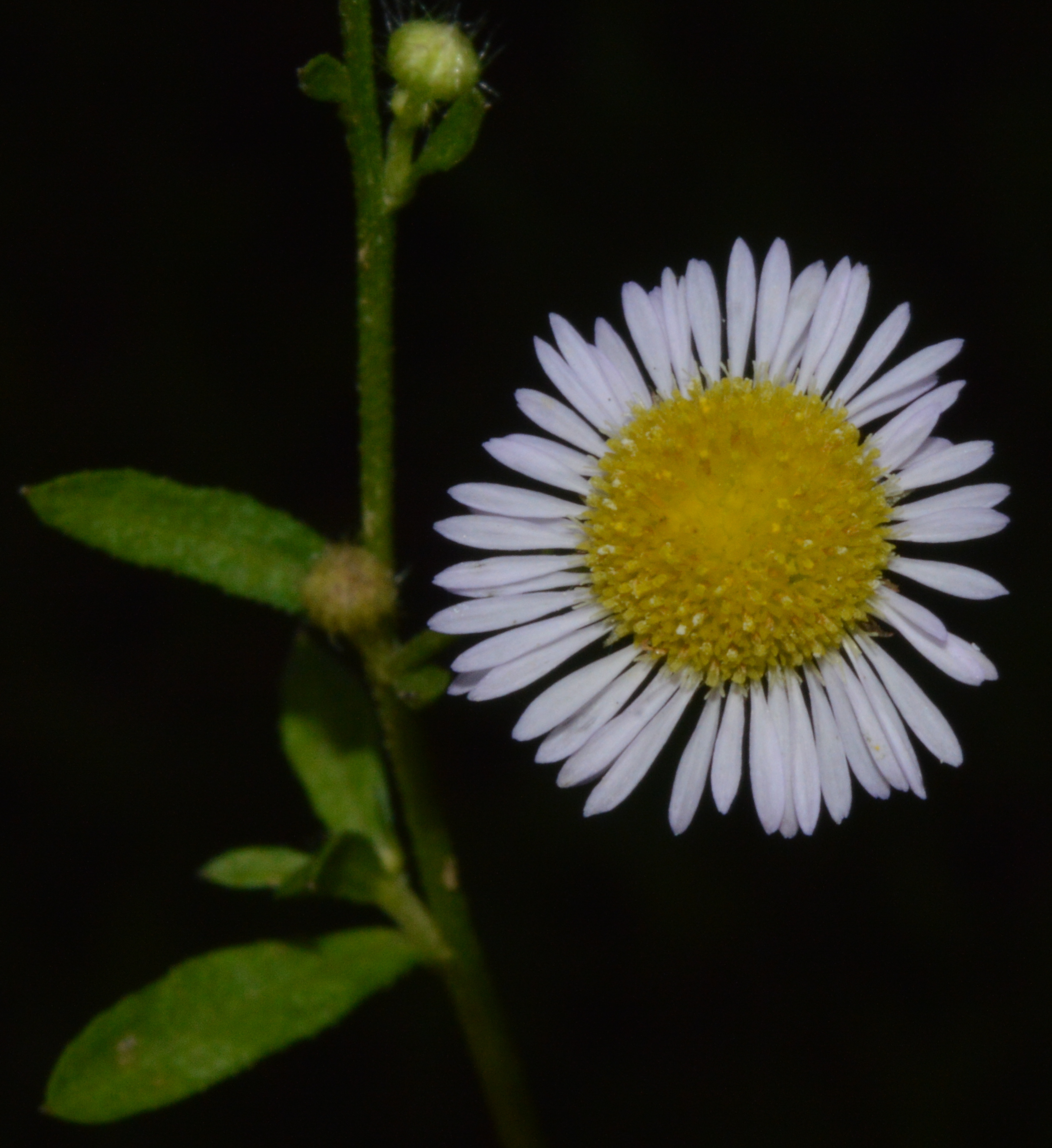 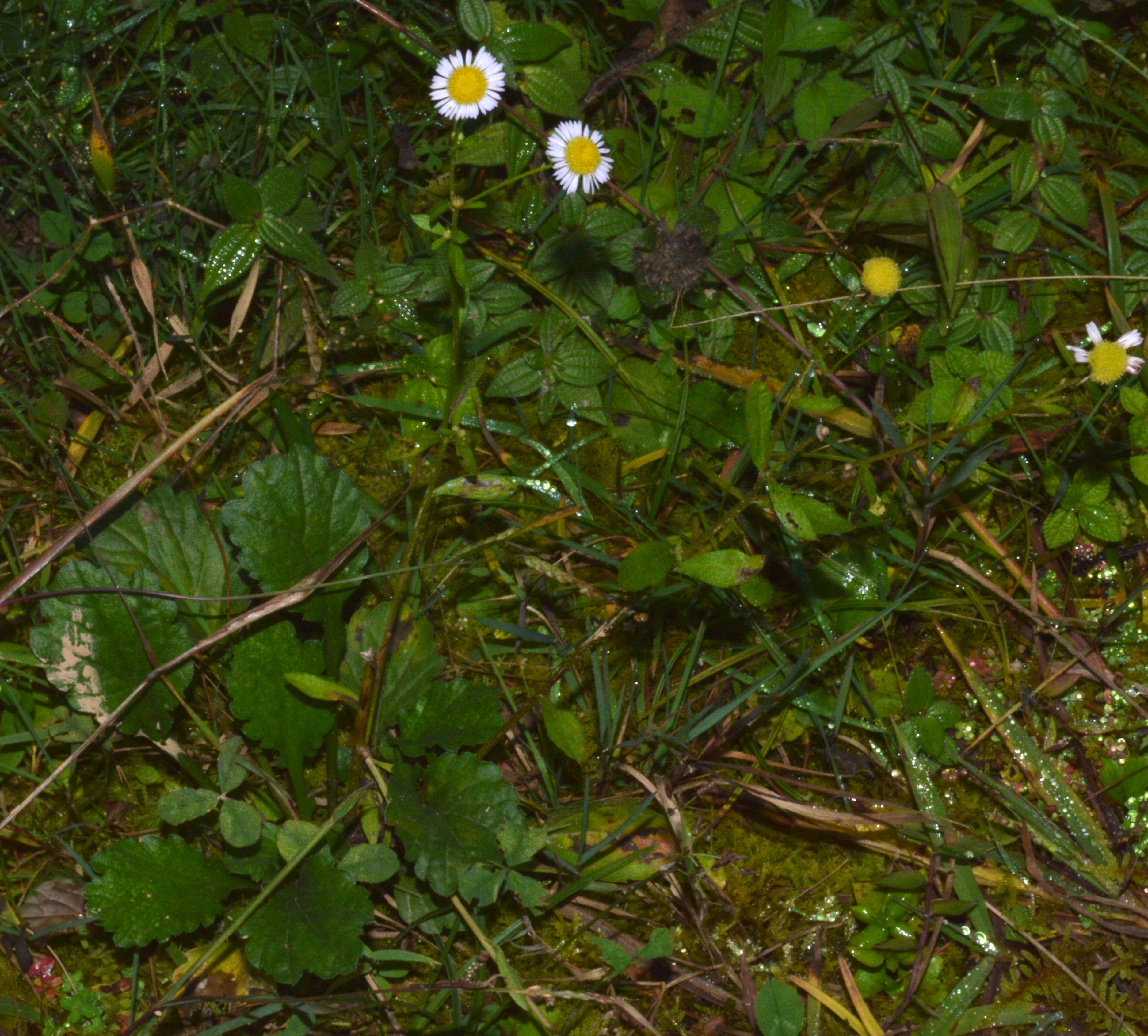 I think looks different from images at Myriactis nepalensis

Erigeron annuus (L.) Pers. as per images and details herein.

Little confused about the shape and stalk on basal leaves.

E. radiatus leaf stalk has wing up to the stem joint whereas my images do not have. 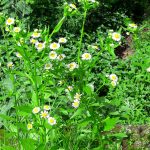 I think it is closer to images at Erigeron annuus