Veronica Species for ID : Golden Gate Park, San Francisco : 06NOV20 : AK-06 : 3 posts by 2 authors. Attachments (3)
Another Veronica from the park.
There are two more, probably identified.
Will post those tomorrow since only three posts per day.

I think Veronica x franciscana only

Veronica Species for ID : Presidio, San Francisco : 07NOV20 : AK-08 : 3 posts by 2 authors. Attachments (3)
This is similar to the one you have posted from Summerwinds Nursery. Hard to choose from Veronica x franciscana (4 rows of leaves) and V. speciosa.

I find these closer to images at Veronica × franciscana Eastw. from California-GS04112020-3 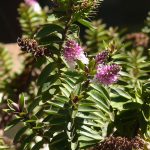 Seems close. But since these are all new to me, I posted for validation.
.

While going through my California plants, I found some I had missed earlier.
Veronica Species seen at the Golden Gate Park.

Appears to be same as at Veronica × franciscana (USA)