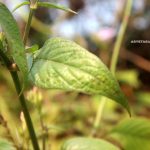 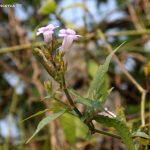 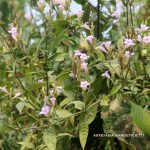 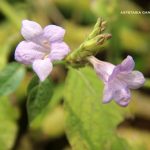 ASYSTASIA GANGETICA : MORE IMAGES
5 images.
There was a request to send more images of the plant. Attaching few more images for further confirmation.

I think it will be Ruellia ciliatiflora as per images and references herein.

May I request you to pl. confirm it as Ruellia ciliatiflora or otherwise.

May I request you to pl. send high resolution images to check more details, in view of doubts expressed by …

This is not Ruellia ciliatiflora. I think it is probably a species of Asystasia (note club-shaped capsule) but I can only see two stamens. It is not Asystasia gangetica as far as I can see. Sorry not to be more definite.

After checking all species reported from India as per details at Asystasia, I found only option is to go for Asystasia nemorum as per GBIF– specimen 1, specimen 2 and specimen 3

But I am not fully convinced.

I seek your kind help in the matter.

I guess it looks different from Asystasia nemorum as well.

Could it be some Strobilanthus species

But Dr. Wood (Expert on Strobilanthes) indicated it to be Asystasia species only.

I too agree with … for Asystasia,

I am unable to solve this mystery. 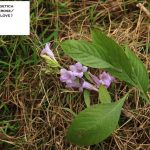 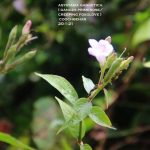 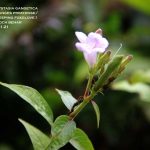 Maybe Asystasia gangetica (L.) T.Anderson only as per comparative images at Asystasia

I think it will be Ruellia ciliatiflora as per images and references herein.

I think same as in ASYSTASIA GANGETICA : MORE IMAGES

This and my earlier post, both have been identified as being the same by …

In the earlier post, the flowers were single, where as there were many growing on one stem here.

Experts, kindly have a look.

Thanks for the suggested id.
I checked for it, doesn’t seem to match my pictures.

Dipteracanthus prostratus, identified by … should be the correct one, since he is familiar with the flora of that area.

I think … is one of our experts’ experts.
However, I would request … to check probability of Ruellia ciliatiflora  Hook. The links that might provide information on the species are –

I am not an expert, and certainly not for Acanthaceae. I may have suggested similarity with D.prostratus. In fact I have not seen R.ciliatiflora.

Thank you very much Rawat Sir. I admit I was wrong guessing probability of R. ciliatiflora Hook. My guess was based on b/w illustration of plantillustrations.org and a herbarium; where flowers are in leafless panicle.

But this species can not be R. prostrata Poir. either; where flowers are solitary axillary and most importantly subtended by leaf like about 1 cm bracteoles.
If you have different version of description of R. prostrata Poir. please share.
Similarly, probability of other species like beddomei, cernua etc can be skipped. In that case this species would be something other than Ruellia.
I am really sorry for making this thread resurface without taking proper precautions. I reiterate this is species is not Ruellia prostrata Poir. unless there is entirely new version of the species documentation.
The only other genus I can think of is Asystasia, I would have suggested A. macrocarpa Nees (as per BSI checklist) but leaves are much smaller in the attached pics.

Thank you very much Sir for the feedback. Unfortunately I do not think R. ciliatiflora Hook. is viable. Because “Annals of the Missouri Botanical Garden, vol. 80: p. 811, fig. 11 (1993)” clearly states that Curtis’ coloured illustration is correct. It also informs R. ciliatifolia Hook. is closely related to R. nudiflora complex. The species feature 10 mm calyx, 3.5-4.5 cm corolla. I think … species has much smaller flower and doesn’t look like a member of R. nudiflora complex.

However, thank you very much for the discussion. At least now we have KEY and description of American Ruellia!

No, … i your plant is not R. ciliatiflora as I have stated in my previous mail sent minutes ago. Now, I would stress on Asystasia. You can see your flower has the form of A. gangetica. Don’t rely in google search of Asystasia. I spent quite some time on finding correct Asystasia images of various species in the net. There is lots of mix-up over the net. What has been marked as A. macrocarpa in certain flickr account has other wrongly identified species. A. macrocarpa should be similar to gangetica I think.

We need to dig more to identify this particular species. Because, I do not know if any other genus, say Strobilanthes can have similar species.

Ruellia is what came to my mind too.

even to me look like Ruellia, habit and leaf structure will help in correct id..

I found one more picture on searching.

Hope it helps since leaves can be seen

Seems to me Dipteracanthus prostratus (Acanthaceae).

Some feedbcak from another post:
“This and my earlier post, both have been identified as being the same by …
In the earlier post, the flowers were single, where as there were many growing on one stem here.
Experts, kindly have a look.…”

I think it looks different from Ruellia prostrata as per images and details herein.
The Closest I can go is Ruellia tuberosa, but I am doubtful about this too, in view of only flowers and no leaves.
Hi, …,

However, Catalogue of Life and POWO do not give any distribution in India.

Does it have distribution in Uttarakhand? GBIF showing around Gujrat only !

Here are the original images.

Can these images be of R. ciliatiflora Hook.?

I don’t think so.

Attached are images of Ruellia ciliatiflora as I know it – But these are not from India so not suitable for your data base!
2 images.
.